The transatlantic passenger liner* RMS Queen Mary 2 made an unplanned and brief call in Halifax in the early hours of this morning. The ship is on the westbound leg of a voyage from Southampton to New York and back, part of a 14 day two way Atlantic crossing. 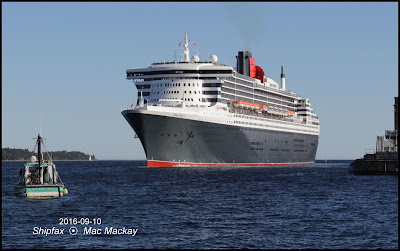 Not all of Queen Mary 2's Halifax calls are in ideal conditions nor in broad daylight.

Such brief calls are usually the result of a medical emergency on board. There has been no official release of details, but it seems likely that weather conditions at sea precluded a helicopter evacuation or transfer to another vessel. Driving rain with torrential showers and high winds alongshore and offshore prevailed over night.

The ship seems to have tied up briefly at pier 22 before sailing at about 0630 hrs. Nor is it known yet if it was a passenger or crew member that needed assistance.

Medevacs are common from cruise ships, and are a fact of life. Fortunately the big ships like QM2 have excellent medical facilities and staff and illnesses or injuries can receive early intervention and stabilization. The risky process of helicopter evacuations can often become unnecessary with good on-board care.  That the ship can also travel at very high speed (up to 30 knots) means that it can reach a port relatively quickly compared to slower speed cruise ships.

The other factor is that family members may need to accompany medical cases, and the physical condition of the case and the companions may make helicopter and ship to ship transfers impractical.

*Cunard has designated Queen Mary 2 as a transatlantic passenger liner, that also conducts cruises. Its design and construction make it suitable for heavy ocean work, unlike purpose built cruise ships. In fact it is now the only ocean liner in the world and the largest ever built.
It also carries mail, and is thus eligible to be designated a Royal Mail Ship (RMS). It was a contract to deliver mail that funded the start of Cunard Line.