It looked like quitting time at the factory late this afternoon in Halifax harbour as three ships all sailed within a few minutes of each other and all from different locations.

First off was Gerhard Schulte. The German owned ship is on temporary assignment with ACL filling in for the Atlantic Sail. That ship, one of the Chinese built G4 ConRos has been in Hamburg, Germany for repairs since April 10.

After unloading and loading at Cerescorp's Fairview Cove terminal yesterday, Gerhard Schulte made an unusual move early this morning to pier 27, probably to take fuel. Now that Halifax no longer has a bunker barge service, pier 27 has become the designated refueling stop where tank trucks deliver fuel directly to the ship.

Next to leave was Zim Luanda from Halterm. 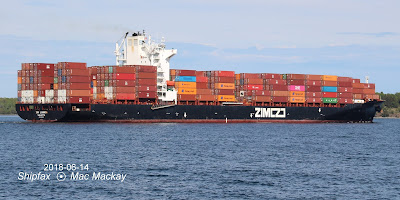 A regular on Zim's weekly service, its next port is to be New York.

The last of the rush hour departures was the Canadian flag Nolhan Ava resuming its spot on the TMSI service to St-Pierre et Miquelon. The ship has come off a refit in Freeport, Bahamas and alongside in Halifax starting in mid-April.

While Nolhan Ava was out of service its place was taken by Lomur which was in Halifax yesterday to discharge cargo from St-Pierre. It then sailed for Portland, ME,  back again under the Eimskip banner. It came off that company's Green Line service in April to work for TMSI.

Lomur does not appear again on Eimskip's published schedule so this may be a one off trip. Eimskip operates a feeder service between Halifax and Portland, ME for CMA CGM on its Green Line ships.