Although we see their containers from time to time on other ships it is rare to see an actual MSC (Mediterranean Shipping Co) container ship in Halifax. As the second largest container shipping line in the world, it calls in many nearby ports including Montreal and Saint John, NB. 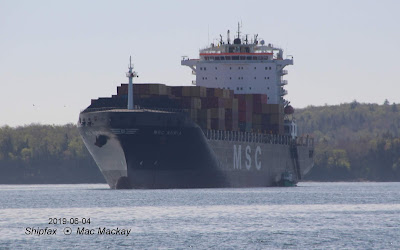 MSC Nuria in number one anchorage with the launch Halmar alongside.

Today's arrival of MSC Nuria however was not a sign of things to come. Instead it was a routine matter of undergoing a Canadian Food Inspection Agency examination for Asian gypsy moth. The ship had recently been in the area of Asia where the moth proliferates and before being allowed to proceed farther into Canadian territory it had to be checked. The procedure did not take long and the ship was underway again in about 3 hours, to continue its trip from Liverpool, UK to Montreal. 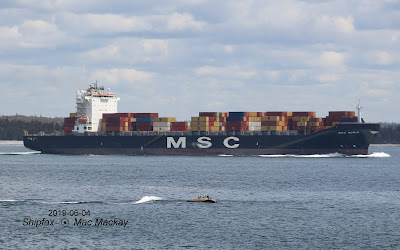 Making its way outbound passing Thrumcap the ship has its accommodation ladder rigged to disembark the pilot when it reaches Chebucto Head.

The MSC Nuria is a 50,963 gt, 63,377 dwt ship built in 2008 by Daewoo's Mangalia shipyard in Romania, with a capacity of 4884 TEU including 560 reefers. MSC moves its ships frequently from one route to another, to put the most appropriate ship on a given run. With more than 525 ships and a fleet capacity is around 3.3 mn TEUs, they have a wide range to chose from.

MSC also operates cruise ships and has two autocarriers on charter to Grimaldi. MSC Immacolata and MSC Christiana are regular callers at Autoport.