New Laker on the Block

One of the stalwarts for many years has been the Atlantic Huron but it has been busy elsewhere and has put in only one appearance on April 17. It arrived in ballast and loaded gypsum. Today however was the first visit to Halifax of a different CSL ship entirely, the Baie St.Paul. It docked at National Gypsum late last night and sailed early this afternoon giving a destination of Cote Ste-Catherine QC, on the St.Lawrence Seaway.

Baie St.Paul is one of a new generation of lakers, that CSL ordered from China to replace older ships. Called the Trillium class, there are several variations, or sub-classes of ships within the group.
One group of six ships was built to the maximum allowable size for the St.Lawrence Seaway locks, measuring 739'-10" x 77'-11" with a maximum draft of 30 ft.  Four of these ships were built as self-unloaders and two were built as gearless bulk carriers.
Another group are Panamax ocean going ships. There are five ships in this group, all of which work within the CSL Americas pool, with one owned by Algoma.

Baie St.Paul is one of the Seaway self-unloaders, and was built to trade within the Great Lakes / St. Lawrence estuary, but not intended to go to sea. Special reinforcing was installed in the ship to allow it to sail from China to Canada on delivery late in 2011. However that material was removed on arrival and the ship had not ventured outside of the Gulf of St.Lawrence since.

During last winter's layup/refit the ship was reinforced again, but in a different way, to permit it to make brief coastal trips. The ship reached Halifax in a quite a circuitous way. The ship loaded petcoke in Thunder Bay, sailing May 19 and passing down through Seaway exiting the system opposite Montreal on May 25. It then proceeded to Point Tupper, NS via the Canso Canal where it unloaded part of its cargo for Nova Scotia power. It then proceeded to Sydney, NS, (via the Atlantic coast route) and delivered the remainder of the cargo, also for Nova Scotia Power. Returning along the same path in ballast it loaded crushed stone at Auld's Cove, NS, hard by the Canso lock. Once that cargo was delivered to Charlottetown, PE the ship proceeded along the west coast of Cape Breton, crossing the Cabot Strait and docking at Lower Cove on Newfoundland's Port au Port Peninsula. There it loaded more crushed stone which it delivered to Summerside, PE.
That done, it proceeded to Halifax , via the Canso Canal, and the Atlantic coast.

The ship berthed stern in at National Gypsum's pier, to allow the travelling ship loader there to reach all the holds without interference from the ship's self-unloading boom. 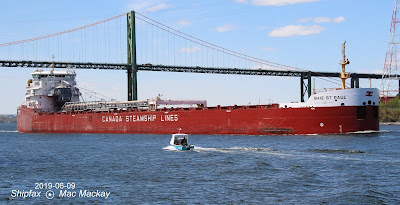 It loaded to about 8 meters draft, representing the maximum allowable Seaway draft of 26'-6", which equates to a cargo of about 29,650 tonnes. Note that Great Lakes ships do not have a "boot topping" or defined waterline with different paint colour above and below. They do not require the same anti-fouling hull treatment as sea-going ships, and therefore there is no distinction between hull paint colour above and below the waterline. Given the extra freeboard, from the ship's maximum draft of 30 feet, that is an added safety factor to allow the ship to go to sea.

Ships built for the Great Lakes have a number of distinctive features: 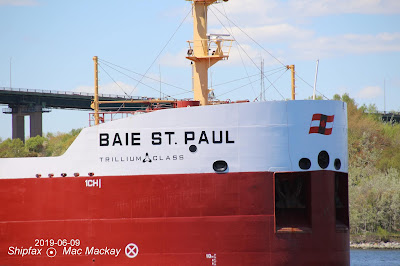 - Fairleads for mooring lines are set into the forepeak of the ship, under cover, where winches and bitts are located.
- Derricks to swing crew members ashore are required for all ships transiting the St.Lawrence Seaway. They are rarely used anymore in the locks since suction plates are now in use instead of ship's lines.
However crew are frequently landed at the approach walls when ships have to wait their turn in the lock and need someone ashore to take lines. 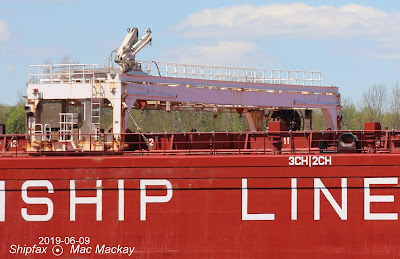 - Lakers have steel plate hatch covers, which are clamped in place when underway. (The clamps are visible in this photo - they are galvanized zinc colour.)The gantry travels on rails the length of the deck and is used to pick up or place and stack hatch covers. 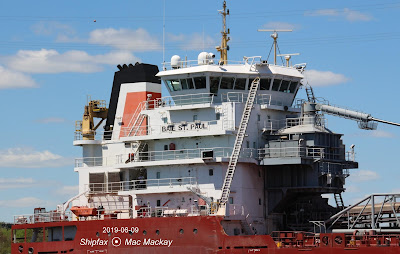 - Long ladders, rigged forward of the wheelhouse are used to embark or disembark crew in the locks or approaches where piers are built very close to the water. The ladders are lowered by means of small electric winches until they rest on the dock - well out from the side of the ship. 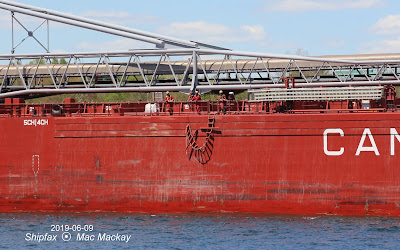 The crew have readied the pilot ladder and will swing it down when it is time to disembark the pilot.
- Note the three broad steel plate straps on the hull just below the deck level in this and other photos above. These are reinforcements added to allow the ship to make short sea voyages by limiting the flexure of the hull.
- The self-unloading boom has an enclosed conveyor belt to reduce the amount of airborne dust when unloading a cargo.

---------------
*On April 9 the articulated tug / barge Leo A. McArthur / John J. Carrick delivered a cargo of asphalt from the Great Lakes to the McAsphalt dock in Eastern Passage.