A recent photo I posted showing a ship sailing beneath the Angus L. Macdonald bridge raised the question of vertical clearance requirements (ship's air draft) and the course a ship is to take to sail under the bridge. 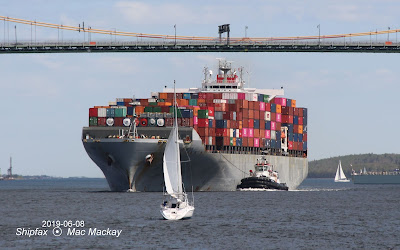 For those interested in learning about this in great detail, they should refer to the Port Information Guide, published annually by the Port of Halifax. The latest version can be found here:

If that provides too much detail for the average person, I will give a much abridged version

All large ships have to apply for permission to transit under the two Halifax harbour bridges. Ships with an air draft greater than 46m are of particular concern since there is a requirement that ships have a clearance between the topmost portion of their mast and the under side of the bridge of at least 1.35m. Depending on the state of the tide clearance under the bridges will vary, so permission is granted on a case by case basis in real time.

Ships know the distance between the keel and top of mast for their particular ship, but air draught will vary depending on how much cargo the ship is carrying, and thus its water draught.

The master is usually aware of the air draught, but it is calculated specifically as the ship enters port. This calculation must then be verified by attending tug and pilot by reading the ship's draught marks. The air draught is then relayed to the Port Authority and if satisfactory the ship is cleared to pass the bridge. (A similar procedure occurs when the ship sails.)

Advance notification of the intention to sail under the bridges is also required from ships so that construction activity beneath the bridge can be adjusted. There are mobile work platforms under the bridge from time to time (called travelers) and they can be relocated in time for the ship to pass.

Assuming there is adequate clearance and the ship is cleared to pass under the bridge, there are also aids to navigation to assist the pilot.

Quoted from the Port Information Guide:

BRIDGE MARKINGS The centre span is marked by fixed navigational lights installed on both sides of both bridges. Additional orange panel markers are affixed to the bridge structure to indicate to the pilot the limits of the preferred channel. Bright green square markers (with both day time and night time visibility characteristics) are positioned 55 meters on either side of the centre span denoting the 110-meter navigation channel.

The orange panels are just visible in the photo above, but seen from a different angle here: 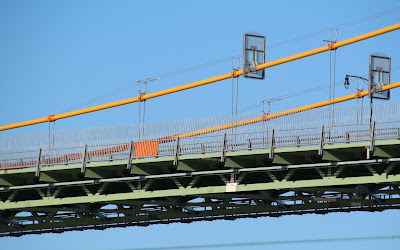 Note there is also a white paint on the bridge structure in roughly the same line. 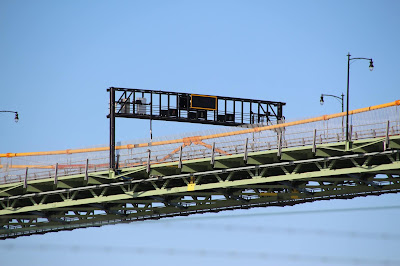 The centre of the bridge is also marked, but with a yellow paint.

The orange panels themselves appear to be fairly recent, and are simply sheets of plywood, painted on one side only and affixed with plastic tie wraps to the bridge fencing. Something more permanent must be planned.