Sails in Halifax harbor are usually limited to pleasure craft except for the occasional Tall Ships event and the yearly visits of Bluenose II. This year those visits will be rarer than usual as "Nova Scotia's Sailing Ambassador" will be traveling far afield.

However it is spending a few days this week in Halifax with public openings and short harbour trips under sail. It will return to Lunenburg for the weekend.This afternoon while getting away from its dock it encountered Silva of Halifax one of the many harbour tour boats, but the only one left that carries sails. 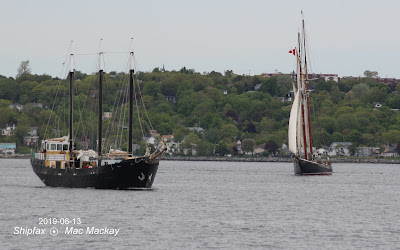 It would perhaps be uncharitable to say that the Silva is a short tall ship, but since it carries no topmasts, it appears rather stubby when seen next to the Bluenose II. Built in Sweden in 1939 as an Icelandic trading schooner, it was converted to a tour boat in 2001 and renamed (officially) Silva of Halifax. It does hoist sails during most of its harbour tours, as it did a few minutes after this photo. 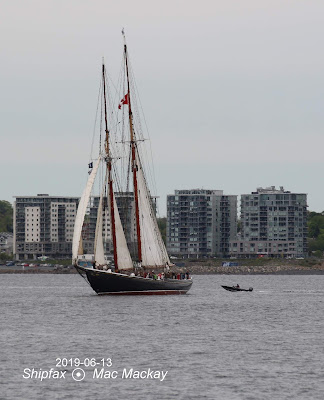 Although not using topsails today, Bluenose II is always an inspiring sight when it takes to the wind.


Nova Scotians wishing to see Tall Ships have only a few days to do so. With the  June 1 arrival back in its home port of Lunenburg, the 3 master Picton Castle will be sailing again this weekend. 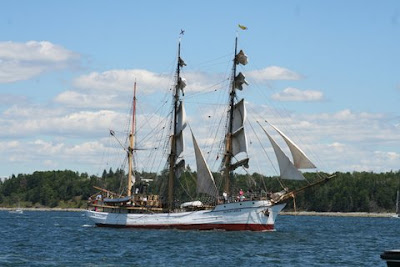 Built in 1928, Picton Castle has just completed the latest, and reportedly the last, of its round the world cruises. In future it will confine itself to the Atlantic Basin, but still carry on its training and other programs. 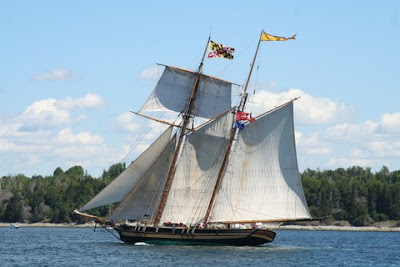 Also visiting Lunenburg is the well known Pride of Baltimore II . A miniature sail past is scheduled for Sunday when it, Picton Castle and Bluenose II depart together headed for the Tall Ships Great Lakes Challenge 2019. 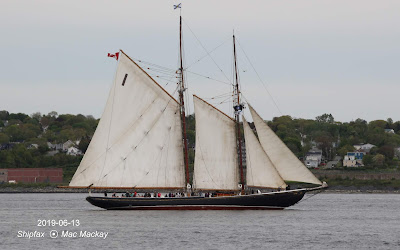