The regular vessel serving St-Pierre et Miquelon for SPMI, Nolhan Ava, returned to Halifax on Thursday May 30 and tied up at pier 9C. The ship sailed from St-Pierre in mid-April for refit Freeport, Bahamas. Whatever refit work was done there, it did not include much paint above the waterline, because the ship's superstructure and upper hull still shows signs of a hard winter's work. 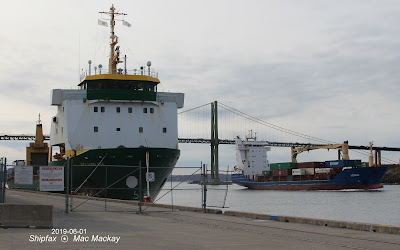 The substitute ship Lomur which has been on the weekly St-Pierre run since April 26, passed the idle Nolhan Ava this afternoon, outbound from Fairview Cove. 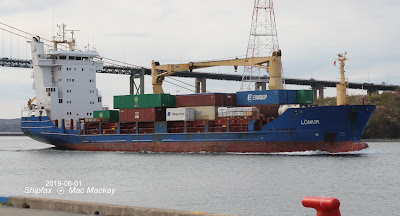 Lomur is carrying a variety of cargo including a box from its former charterer Eimskip. Note also one of SPMI's 53 foot sea going containers stacked on a Zim 40 footer.