The MSC Poh Lin anchored in Halifax shortly before noon for Asian gypsy moth inspection. The ship is en route from Liverpool, UK to Montreal, and was diverted to Halifax for examination by the Canadian Food Inspection Agency . This annual ritual of ships that have recently been in Asia is an endeavour to keep the invasive species from spreading to Canadian forests. 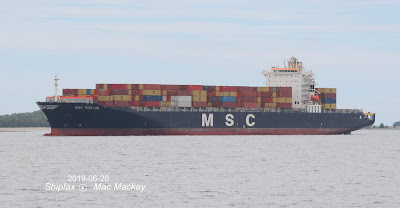 MSC has been in the news recently with the seizure in Philadelphia on June 18 of MSC Guyane when it was found to be carrying 35 thousand kilos of cocaine worth an estimated $1.1 billion. Several crew members are in custody suspected of arranging the transfer of the drug from small boats while off the South American coast. It is reported that several crew members were offered sums of money in the range of $50,000 to participate in the scheme.

MSC Poh Lin had its own similar experience in July 2016 when it was detained in Gioia Tauro Italy after cocaine was found on board. At least one crew member was implicated.

Shipping lines are plagued with issues these days, including stowaways, mislabeled cargo and smuggled goods. All this at a time when they are struggling with low freight rates and intense competition.