Ownership is often a murky subject when it comes to ships. For a variety of reasons ships are sometimes owned by what are known as "single ship" companies. The company, often incorporated in a tax haven, owns only the one ship, and the company's shareholders are shielded from liability through a complex tangle of investors, banks, lenders and mortgage holders. Not that it is any of my business who actually owns a ship. A good thing too since it is frequently impossible to determine who actually does own a ship. In fact some well known "ship owners" have become ship managers only and don't actually own any ships, preferring to operate them for others.

Unclear ownership is not restricted to unscrupulous operators flying the flags of dodgy nations. Even large, well established and respected shipowners are given to spreading the ownership of their fleets among a variety of entities for perfectly legitimate reasons such as ownership syndication.

Despite all the obfuscation some shipowners want to identify ships as part of their fleet by selecting names with common themes, adopting common stylistic preferences and painting them in company colours. The most obvious means of identification is the time honoured funnel marking.

All this forms a back drop to two ship arrivals in Halifax yesterday and last night. Two tankers, both coming from Amsterdam, one tying up at Irving Oil and one at Imperial Oil, both with names from Greek mythology. There are lots of Greek tankers in the world, but would the owners of these ships be connected is the obvious question (at least to me).

Having researched the daylights out of the question, I am still not sure.

First in was the Strymon. Named for the mythological Greek river god, son of Oceanus and Tethys, it is wearing the gray hull and traditional "lambda" (Greek L) funnel marking of Stavros G. Livanos. A typical mid-range tanker of 30,020 gt, 47,120 dwt, it was built in 2005 by STX Shipbuilding Co in Jinhae, South Korea. It tied up at Irving Oil's Woodside terminal. 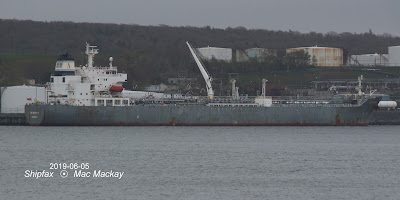 From what I can learn, the ship, flagged in the Bahamas, is owned by Empire Navigation Ltd-LB and managed by Sun Enterprises Ltd-LB. Visiting the Sun Enterprises website, the company traces its history to 1920 and mentions acquiring 12 Liberty ships in 1947. That history is common with the legendary Stavros G. Livanos, but the name Livanos appears nowhere in the history. A side bar gives S.Livanos Hellas SA as manning agents. That company, based in Athens appears, at least in name, to be the successor to the famed shipping "empire" of Stavros G. Livanos and his son George S. Livanos.

The second arrival, which tied up at Imperial Oil's number 3 dock, has, at least so far, been invisible due to rain, is MR Orestes (MR standing for Mid Range and Orestes for another Greek mythological character).

--- picture to be added if it becomes available ---

Flying the Marshall Islands flag, it is a 30,006 gt, 50,106 dwt ship. Built in 2009 by SPP Plant and Shipbuilding Co, Sacheon, South Korea as Hongbo it was renamed in 2015 by current owners MR Orestes Shipping. Managers are listed as Empire Navigation Inc. A search reveals Empire Navigation Inc as a totally different company from Empire Navigation Ltd. Although based in Greece, it has a different address and a location in the Athens suburb of Elliniko.

So is there a connection? Other than the coincidence of arrival from the same port at about the same time, it appears not.

All this delving into ownership of course recalls that Stavros G. Livanos was one of the famed Greek shipping tycoons. Notably frugal, he was quoted as saying "I have no money. I have ships." Nevertheless he traveled in very wealthy circles. One daughter married Aristotle Onassis and after divorcing him, married among others Stavros Niarchos. The other daughter had previously married Stavros Niarchos too. The Livanos family therefore had a front row seat to the legendary rivalry between Onassis and Niarchos which was fought out by building larger and larger tankers.
George S. Livanos, son of Stavros G. seems to have inherited the family business, but has been able to completely shield himself from any notice or notoriety.

As for the Onassis and Niarchos "empires", there is much to be told. However simply put the Onassis family foundations have many shipping investments and Olympic Shipping and Management still owns and operates ships. The Niarchos family investments are widespread in real estate but in 2013 they pulled out of shipping. After a series of oil spills from other Greek tankers and huge liability claims, they decided the business was too risky. They now count hotels and ski hills in St.Moritz, Switzerland as part of their portfolio.