More band aids for the Port of Halifax

Not to disparage Johnson+Johnson, whose trademarked product (which has a hyphen and a capital A) has become a collective for all products of the type, but their self adhesive bandages were never intended to be a substitute for major surgery.

Canada's Minister of Transport came to Halifax on Sunday to announce a couple of expensive projects which will perhaps stop the blood flow temporarily but will not be the long term solution to the Port's major problems.

The $100 million price tag is pretty steep for an interim measure however. (The federal government will pick up "at least" 50% of the cost.) Flanked by local politicians, and Port officials, who will have to ante up the rest, the press conference made some big promises, but also dropped a few hints of reality.

The essence of the promise is as follows:

1. A new rail line from the southend container terminal (Halterm) will be built as far as the Cerescorp terminal at Fairview Cove. (CN ripped up the second track a few years ago to make its revenue figures in terms of tons per mile of track look better, and to reduce maintenance costs, make life more difficult for VIA Rial, etc.,)
Four new "rail mounted cranes" - presumably two at each end - will load and unload containers on shuttle trains that will run between the two locations. The intent is that all containers arriving and departing from Halifax by truck, will be worked at the Fairview Cove terminal.

The provincial minister of Labour and Advanced Education, and MLA for a riding that includes the southend of Halifax (and Sable Island by the way) stated that the project will reduce downtown truck traffic by 75%. This seems to me to be an optimistic statement. It may reduce port related truck traffic that much, but the grain elevator, the flour mill and the break bulk piers in the southend generate a fair amount of truck too, and that will not change, at least in the near term. Non-standard loads and RoRo trailer traffic for Halterm will still have to be accommodated. Dozens if not more truck trailers arrive and leave for Newfoundland from Halterm each week for example. 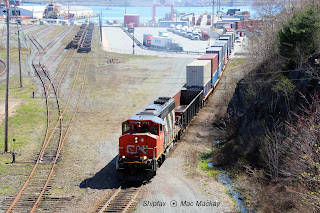 Dedicated shuttle trains will reduce truck traffic to Halterm. The truck marshaling yard in the background will be still be neeeded, but may be reduced in size. One twice the size will be needed at Fairview to accommodate incoming and outgoing traffic. How Halterm will handle the additional rail traffic is a big question. Changes may be needed to South Marginal Road (in the  centre background to enclose some the tracks on the left.
(View from Young Avenue bridge looking east.)

2. In order to make the shuttle service work, a major reconstruction of the "Windsor Street Exchange" will require a re-alignment of the Bedford Highway, upgrading Lady Hammond Road and new traffic signals. All this to get those trucks in and out of the Fairvew terminal. Many of the trucks are using the A. Murray MacKay bridge, and the approach ramps and left turns at unsignaled intersections are a nightmare. There is significant container interchange between the two terminals as it stands now, all taking place by road, and with that eliminated by using the shuttle train. 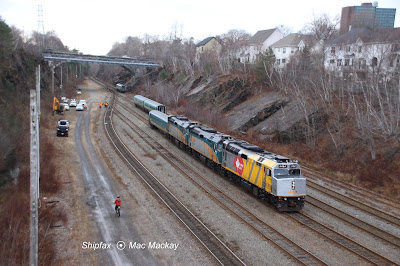 There is room within the existing rail cut for the second track because CN once had a second track.
Some of that track exists now as a siding, but peters out just around the bend in the background of this photo, well before reaching Fairview.
VIA Rail co-exists within the space with alternate-day trains. Commuter rail proponents hoped that the second track could be restored for that use. That will no longer be possible.
(View from Young Avenue bridge looking west.)

While this work is welcome there are a few reality checks.
- the work will not begin until 2020 (supposing the current federal government is re-elected in October?) Some design work has been done, but the work is not "shovel ready".
- the second rail line through the southend rail cut virtually eliminates any chance of commuter rail service to downtown. CN has never wanted this, so they will be relieved.
- the work will take four to five years (from now). During the same time period the Cogswell interchange will be reconfigured in the middle of downtown and utter chaos will reign when even the roads that exist now will be torn up and trucks will jam alternate routes all over town.

In view of the large numbers of trucks that use each terminal already, there will have to be a new marshaling area at Fairview for the southend traffic. Exactly where that will be and how it will be accessed remains unanswered. It seems that with rail mounted cranes the trucks may be loaded / unloaded directly truck to train or train to truck. If so truck marshaling and ordering will be a big part of the operation. If it is to occur inside the Cerescorp terminal fence an expansion will be necessary.

Faced with a transfer fee or delay to get their boxes in and out of downtown, some lines may opt to move their business from Halterm to Cerescorp. I have been suggesting that for some time, as a no cost alternative to truck traffic. I am sure Halterm's new operators will not be amused by this suggestion.

No mention was made of a terminal railway operation, run by the Port, so presumably CN will run the shuttle. They will certainly not do it for free, so how will they be compensated? Shippers, shipping lines and terminal operators are normally averse to extra charges. It seems likely to me that there would have to be something like hourly shuttle trains each way to avoid congestion and backlog. They would have to be confined to the new track so as not to conflict with the other rail traffic and so there will have to be cars loading and unloading at each end simultaneously with a push/pull unit in transit and several dedicated tracks at each end to accommodate. I foresee South Marginal Road between pier 24 and Halterm relocated (again) or (horrors) closed to the public to eliminate the many grade crossings that may be required.


As I stated in the opening paragraphs these projects, supported 50% the National Trade Corridor Fund, do not address the core issue for the Port of Halifax. Fixing roads and rail lines is all good as an interim measure, but in fact that just delays the inevitable decision on how best to increase the capacity for container ships while maintaining the existing south end port infrastructure to serve cruise ships, break bulk, RoRo and bulk ships.

During peak cruise season it is not unusual to have four or more ships in port at once. Two of the ships shown above occupy space that is to be filled under Phase 2 of the current master plan. That would leave no berths available for those ships.
Anchoring and ferrying passengers ashore in tenders would not be a workable alternative. 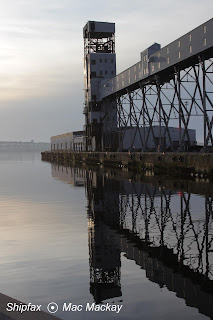 Even under-utilized facilities such as the grain terminal are important assets of the port and should be retained and even promoted. 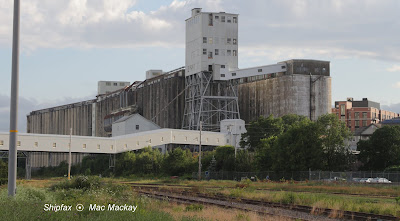 The grain elevators are in regular use, served by rail and road. Cutting off sea access would be short sighted. As a footnote, an imaginative re-coating would improve the Port's image, at least in my mind, since they are highly visible to every incoming cruise passenger.

I hope the significant investment of $100 million will not constrain against a relocation of the container facilities in the future. Maybe these measures will give the Port some breathing room to re-visit their master plan and come up with a bold new plan as promised by their CEO at Port Days in 2017.