As the year progresses, and the north becomes accessible once again, research activity is gearing up. Today's arrival of CCGS Amundsen is en route to the north once again. 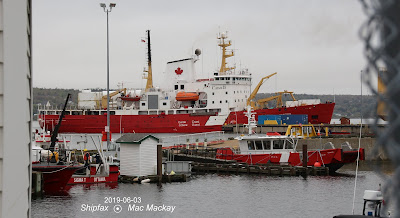 Thanks to a gypsum train blocking the road, my plan to photo the ship as it sailed up the Narrows was foiled and I had to settle for this view as the ship made for its berth at BIO.

Built as a Pierre Radisson class icebreaker in 1979, the former Sir John Franklin (ex Franklin 1979-1980) had been declared surplus in 1996 and actually decommissioned in 2000. Thanks to NGOs that found outside funding, the conversion of the former hold for extra accommodation and other work, such as installation of a moon pool, was carried out by Verreault at Mechins in 2003. 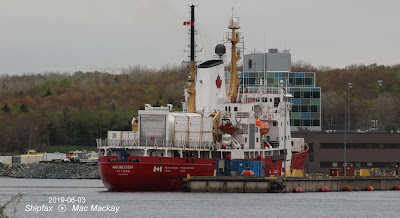 The scarcity of other marine resources in the Arctic has meant that its research work has been interrupted by emergency work. Last year's grounding of the Akademik Ioffe for example took the ship away from its main mission.

The ship tied up at BIO this morning to load equipment for its 2019 season. Its trip from Quebec City was not without incident however. It experienced a propulsion failure May 31 off Cacouna, QC, but the crew managed to effect repairs while the ship drifted.

This class of vessel - among those to be replaced by new ships as part of the fleet renewal recently announced - have had a history of engine issues with their Alco main engines. Equipped with six of the engines, working through electric drives, the ship generates 17,700 shp for its two props.


Amundsen is believed to have accompanied another vessel for at least part of the trip. The 66 ft William Kennedy is the only research vessel dedicated to Hudson Bay. Owned by the non-profit Arctic Research Foundation and operated with the University of Manitoba and the Churchill Marine Observatory, the boat has a surprisingly large capacity. It can house up to 14 researchers in addition to its crew. 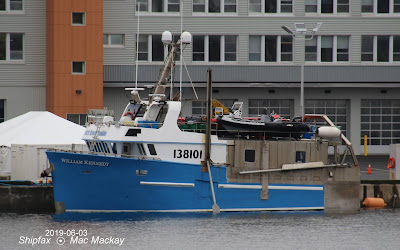 Built in 2002 as a crab fishing vessel White Diamond  it was converted to research work in time for the 2018 season when it sailed out of Summerside, PE for Hudson Bay. Now tied up at The Cove, it is also being readied for summer work.

Built of Kevlar reinforced fiberglass over a wood hull, it has extra reinforcing for work in ice. Its 12 foot draft allows it to work in shallow water. The bay's extreme tides make that a desirable attribute.