As the cruise season winds down, today was the last big day, with four ships in port.

It was pretty much wall to wall ships at the seawall and finger piers.

Regal Princess was last to leave this afternoon and sounded its mournful "Love Boat" goodbye whistle several times. If you haven't heard it go to: https://www.youtube.com/watch?v=qWQlAglh9NI
It does sound somewhat more tuneful in reality, and much louder up close.

Still at pier 28 HC Svea-Kim (blue hull) resumed  unloading rails, but the tanker BW Raven had to vacate pier 31 and went back out to anchor (again). 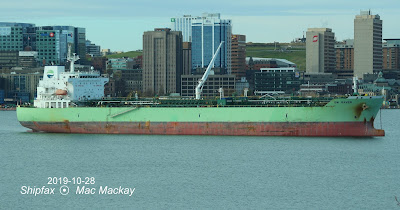 .
When Puze sailed, giving Rotterdam as its next port, 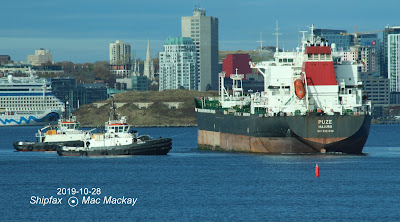 it was back to number 3 oil dock for BW Raven. 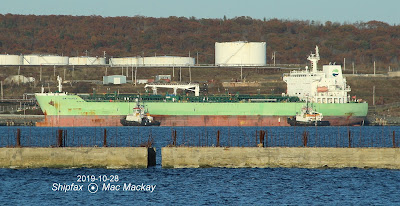 Clearly there was some sort of problem with the ship or its cargo to make it move within the port so many times.

There was also activity at both container terminals.

Atlantic Sun called at Cerescorp Fairview Cove on the westbound leg of its trip and Halterm had Pengalia for Eimskip, eastbound from US ports for Iceland via Argentia, NL. 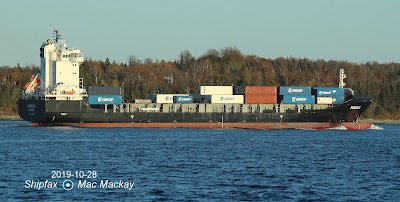 Pengalia flies the Cyprus flag and is managed by Marlow. Skogafoss built as Ice Bird has just recently been purchased by Ernst Russ (part of Zeaborn) and will continue its charter to Eimskip, with management shifting from Briese to Zeaborn.

The builders of these ships, Sainty Marine, part of Jiangsu* Guoxin Group, a state owned company, claimed the distinction of being the first publicly listed Chinese company to declare bankruptcy. It has since been liquidated and its former president was sentenced to 18 years in prison for fraud.

* Jiangdu is a district within Yangzhou, Jiangsu Province, in central eastern China.