All week forecasters had been predicting a storm for today, so it came as no surprise that very high winds with the usual driving rain prevailed most of the day. Cruise lines are particularly aware of weather, and plan well advance with a "Plan B". Several ships deviated from their itineraries and sought shelter where they could.

Regal Princess from Saint John, NB made a U-turn and headed for New York.

Pilotage operations were suspended in Halifax this morning and will not resume until tomorrow morning at the earliest. Late evening departure times were scrubbed and ships were obliged to remain in port. Seabourn Quest, Veendam and Celebrity Summit (which had all managed to get tie up this morning - with tug assistance)  added an unaccustomed glow to the waterfront this evening with deck lights ablaze.

Some commercial traffic was also forced to hold off, including the container ship Jennifer Schepers for ZIM and the tankers Ardmore Sealifter. for Irving Oil and  BW Raven for Imperial Oil. The ConRo Atlantic Sun is also stuck here over night.

In view of these conditions Shipfax suspended outdoor operations and thus have no current photos to illustrate any of the above. However, consulting the photo archive department the publisher submits the following as a follow up to yesterday's post on harbour craft: 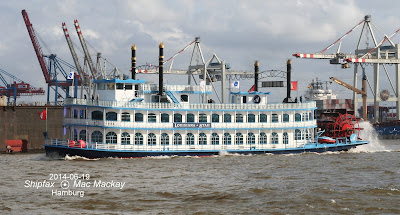 Louisiana Star is a 500 passenger day trip boat operated in - of all places - Hamburg, Germany. Built in 1999 it is powered by two Schottel rudder propellors. As Google translate so aptly puts it, it is modeled on an American "tailwheel steamer" and the wheel "serves only the optics."