This blog normally concentrates on larger ships that come and go in Halifax. However there are numerous small craft that work in the harbour and are often overlooked. These includes, work boats,  Navy, Coast Guard and research small craft.

Harbour tour boats are kept busy this time of year, not only with cruise ship passengers, but also the many "fall foliage" bus tour visitors and late season tourists who came after the summer rush.

Most of the boats have been here for many years, but some are relative newcomers.

Longtime tour boat operators Murphy's, founded by the Murphy family, was sold and in 2014 merged with the Ambassatours Gray Line bus operators. In September 2019 it was announced that Ambassatours has sold its bus operations to Coach Atlantic of Prince Edward Island, operators Maritime Bus. Murphy's, which also includes restaurants and shops, was apparently not part of the deal.

The longest serving vessel in the fleet is Harbour Queen One, the faux-Mississippi paddlewheeler is typical of similar craft operating in many ports of the world. They are out of keeping everywhere - except New Orleans, where they actually have a real one! 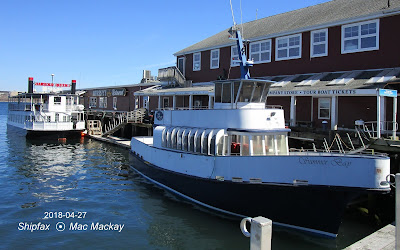 Another Murphy veteran the Summer Bay was retired at the end of last season and is reported to be for sale.

Back in Halifax this year after spending last summer in Saint John, NB, Theodore Too does nor seem particularly busy, but does put in an appearance at special events. 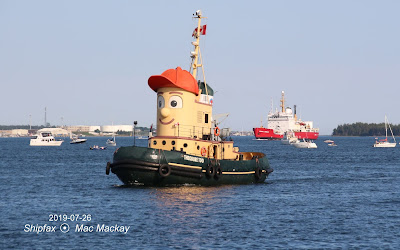 Acquired two years ago from Ontario operators, Kawartha Spirit has still not been renamed with a more local moniker. I suggest that it be named Haligonian IV as it is fourth in line of direct succession from the first tour boat operated by Murphy's. 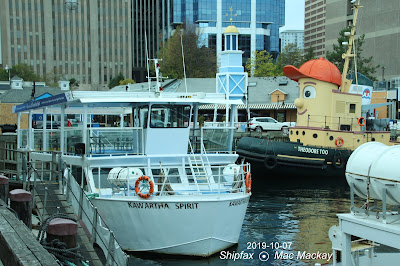 Murphy's headquarters at the Cable Wharf is crowded with their fleet. 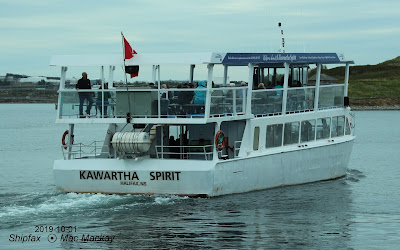 Murphy's also operate the stylish Peggys Cove Express built on lobster boat lines and providing very fast service and nature cruises. Its hull was painted blue in past years, but is now white in line with the rest of the fleet. 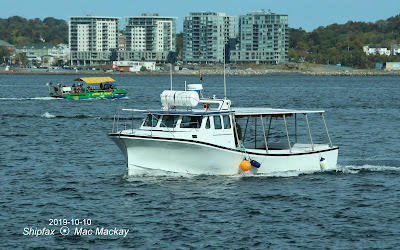 The amphibious Harbour Hoppers (there are upwards of five) are ever present in the harbour and on the streets - enough said. A Hopper was stationed in Sydney, NS last year but has not returned this year. 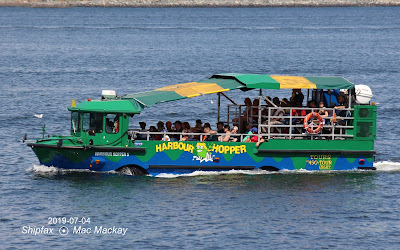 The "Tall Ship" Silva operates under sail or bare poles depending on conditions and continues to be popular. 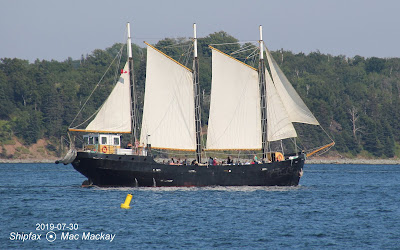 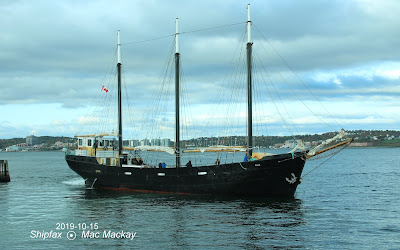 Winstar Cruise operates from Alderney Landing in Dartmouth and caters to Asian visitors with seafood meals and service in Chinese. The boat was new to Halifax last year. See previous post: http://shipfax.blogspot.com/2018/07/new-halifax-tour-boat.html 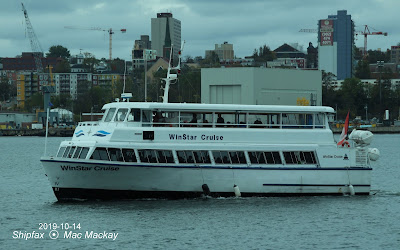 There are other smaller boats in the harbour tour and Northwest Arm tour business. This is a boat I have seen only once and unable to identify by name. Vessels under 15 gross tons are not necessarily registered by name, but by number. However they commonly have unofficial names. They are also required to display the registration number. They can also be registered by name. If so the name is to be displayed.
The operators have a web site: https://halifaxharbourtours.ca 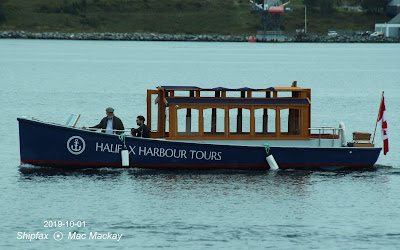 The 60 minute tour for six people, is billed as quietly "all electric" in a classy thirties "European river boat" style replica. The 30 footer is new this year and runs from Purdy's Wharf.


The Cameron Brothers of Stewiacke, NS built the schooner Katie Belle themselves and brought it to Halifax in 2016 with the intention of operating harbour tours, but the boat has remained idle in Mill Cove again this year. 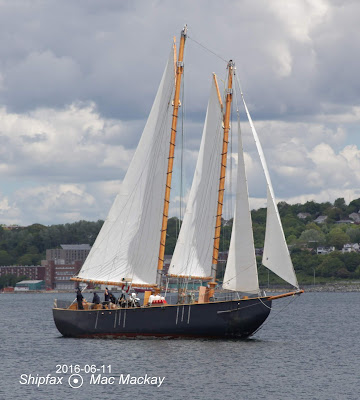 Several boat operators in Eastern Passage offer fishing trips outside the harbour, but that is the subject of a future post.