CCGS Sir Wilfred Grenfell sailed from St.John's, NL on Monday, October 28. The ship has been transferred to the west coast as part of the longer term SAR ship replacement program. Normally based in St.John's it has worked out of Halifax from time to time over the years particularly for the fall opening of lobster season when there may be extra calls for search and rescue. 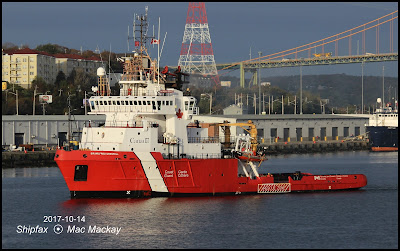 Once it reaches Victoria, BC the Grenfell will replace CCGS Bartlett until new ships are delivered.

Sir Wilfred Grenfell was built in 1985 by Marystown Shipyard as an offshore support vessel and converted for CCG Search and Rescue. The vessel it will replace, CCGS Bartlett, was built in 1969 by Marine Industries Ltd in Sorel, QC as a medium endurance multi-task vessel. A Provo Wallis class vessel it was refitted in 1988 by Halifax Shipyard and again in 2010 by Allied Shipbuilders in North Vancouver. That refit was to give the ship ten more years of service, which will soon be up.

Both ships carry names that are well known in Newfoundland. Capt. Bob Bartlett, a native of Brigus, had a fleeting connection with Victoria - see https://www.victoriaharbourhistory.com/harbour-stories/explorers/archibald-menzies-2/  but is better known for his arctic exploits.

Sir Wilfred Grenfell, born in England, was a medical missionary to Newfoundland. His work in providing medical and later vocational aid to Newfoundlanders, Labradorians and Innu from his base in St.Anthony is legendary. The Wikipedia entry probably does not do justice but provides a brief overview: https://en.wikipedia.org/wiki/Wilfred_Grenfell.