The Federal Court of Appeal has ruled against Oceanex in its latest attempt to force Marine Atlantic to charge commercial rates. Oceanex has  long held that the Crown Corporation has an unfair advantage over Oceanex for Newfoundland freight because it charges less than cost. Oceanex, contends that as a private company it must recoup costs in order to stay in business and to reinvest in its fleet.

This battle has been fought before, and both sides have had victories, dating back for many years to  when Canadian National Railway, then a crown corporation, operated the Gulf service. The Canadian Transportation Commission found it guilty of predatory (non-compensatory) pricing, through its Terra Transport operation on at least two occasions.

Oceanex formed in 1991, brought together the Montreal/ Newfoundland and Halifax/ Newfoundland services of ACE (Atlantic Container Express) and ASL (Atlantic Searoute Limited) respectively. Original equal share owners Clarke (then owned by Newfoundland Capital), CSL (then owned in part by Fednav), Fednav and A. Harvey took the company public in 1998. Since 2007 the company has been privately owned.

The Montreal service continues year round with two modern ships.

Oceanex Avalon  built in 2005 by J.J.Sietas, Neuenfelde, Germany is a container only ship. 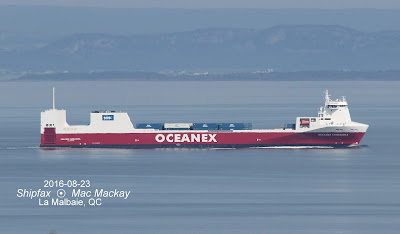 Oceanex Connaigra built in 2013 by Flensburger is a Con-Ro, that has been used on the Halifax run to cover refits.

The Halifax / St.John's weekly service is maintained by the now venerable Oceanex Sanderling. 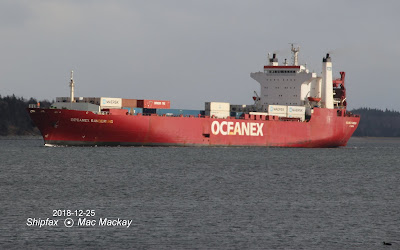 A particularly fine ship, Oceanex Sanderling has served the route exceptionally well, but is overdue for replacement. Oceanex's Chairman (and reportedly principal if not sole owner) has been adamant that the noncompetitive environment with Marine Atlantic precludes that.