In a series of strongly worded statements the two top leaders of Atlantic Container Line threatened to, then indeed did, cut Halifax out of its transatlantic shipping schedules today, diverting all traffic to US ports. The move was in response to a rail blockade between Montreal and Toronto that has resulted in CN largely halting all rail operations east of Toronto. The blockade is in sympathy with protests over the proposed routing of a gas pipeline through indigenous territory in British Columbia. 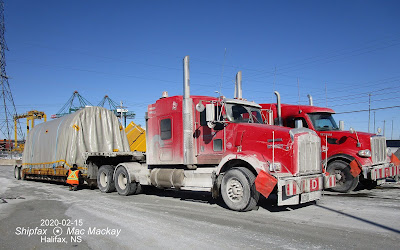 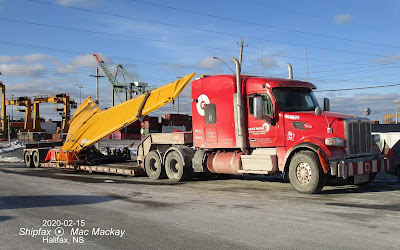 Fuselages and tail structures built in Ireland are shipped via Liverpool, UK to Halifax then trucked to Quebec.

Starting even before Halifax's first container terminal was completed, ACL now runs its fourth generation of ConRo ships. The ownership of the line has evolved from a consortium of traditional shipping companies from the UK, France, Holland and Sweden to its present position as a wholly owned Grimaldi Group subsidiary. 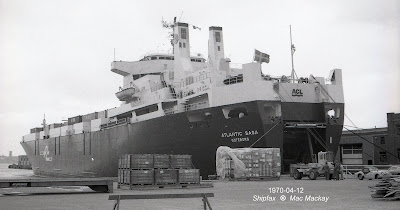 One of the magnificent  "S" class of first generation ACL ships, Atlantic Saga unloads at a barely recognizable pier 36. It belonged to ACL partner Swedish America Line. Built in 1967, it was broken up in 1987.

ACL also serves New York and it is thought that most of the cargo that was worked through Halifax can be handled by US railways or trucks. 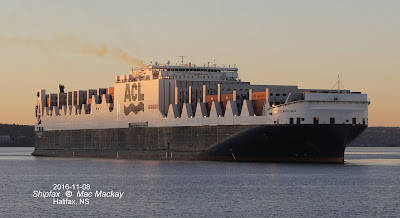 The G4s are the largest ConRos in the world and are also an impressive sight.

There was some train activity in Dartmouth today, with autoracks and open gons. However Autoport has issued layoff notices and all its tracks are full of racks waiting resumption of rail service. There should be no reason why gypsum trains can't keep moving but apparently CN feels it is being targeted and any activity could result in more protests.

Some sources say ships of other container lines and autocarriers will continue to call in Halifax, but is seems certain there will be a huge drop off in cargo handled.