Return to near normal

Before the rail blockades began to disrupt freight traffic in and out of the Port of Halifax last week CN had one inbound and one outbound train from Halifax each day, each about 10,000 feet long. The trains carried mostly containers - both seagoing and intermodal - but also various types of general and bulk commodities.
Trains in and out of the Dartmouth side the harbour carried autoracks and petroleum tank cars (including propane) and also general freight.

With the rail disruptions all available container cars were loaded but held within the container piers awaiting removal of obstacles. (Some traffic was re-routed through northern Quebec and on CP tracks, but not enough to keep all goods moving.) 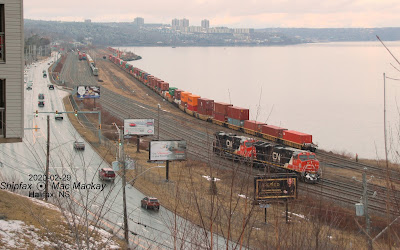 Now that there is some easing of the blockades, Halifax received a full 15,000 foot train today. However it will take some time to relieve the 100,000 feet of cargo stored on rail cars within the terminals. On top of that, ships keep arriving!