It was a good morning to get back to work in Halifax harbour.

With the arrival of the 9200 TEU container ship APL Miami at PSA Halifax, all four cranes were back at work. The number 2 crane (second from the right) had been out of commission for a time after contact with a ship's crane, but appeared to be working fine this morning. 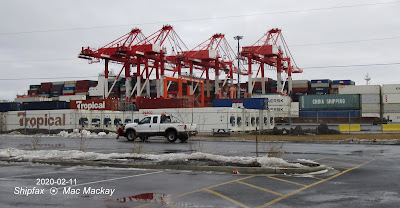 HMCS Moncton sailed this morning after a cold move yesterday. It carries a commemorative paint scheme in recognition of the 75th anniversary of the end of the Battle of the Atlantic. [If you enter "Moncton" in the search box on the left you will find several references to this "Disruptive" means of confusing ship spotters.] 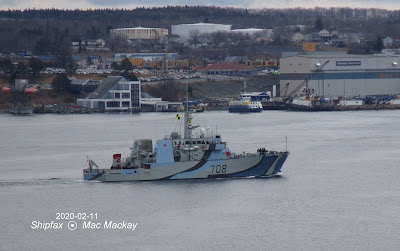 It sailed past a now vacant Woodside Industries (IEL) pier. The oil rig Noble Regina Allen was in the process of moving to #2 anchorage. 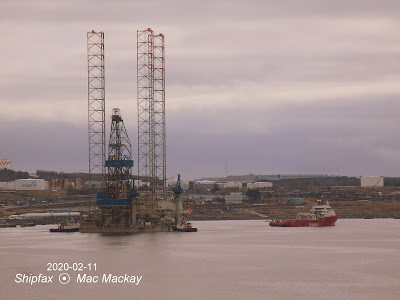 Siem Commander has the rig in tow, and with the assistance of harbour tugs Atlantic Oak, Atlantic Larch and Spitfire III is headed for the anchorage. The rig has been in for repairs before starting its next project.