Another pair of ships that met up in Halifax. By coincidence products of the same shipyard as the last pair, they were much better looking!

Another pair of twins in Halifax, loading at pier 30-31.

In the early 1960s Chimo Shipping Ltd of St.John's, Newfoundland contracted with Port Weller Dry Dock in St.Catharines, ON to built a pair of heavily ice reinforced general cargo ships.

Chimo was owned by Crosbie + Co Ltd, a St.John's, Newfoundland enterprise that traced it roots back to the early 1900s. The company had extensive experience with navigation in the north starting in 1947 transporting radar components to remote locations as part of the Mid Canada Line and the DEW Line, but had generally chartered ships or bought second hand. These were their first new ships.

Crosbie formed Chimo Shipping and went into partnership with Clarke Steamships to form Chimo-Clarke Northern Services, which used the two ships. Clarke also chartered the ships for their St.Lawrence service and Chimo fitted them out for the annual spring seal hunt. 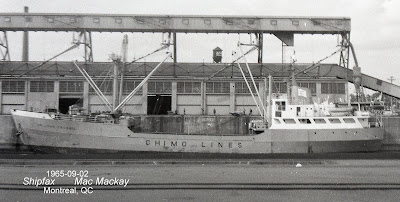 In Montreal on Labour Day weekend 1965, the ship is likely loading for the north.

They were also chartered by CN Marine in the spring of 1970 and 1971 when North Sydney was blocked by ice and freight was diverted to Halifax. In those pre-container days, freight was "handballed" from box cars to ships.

First to be completed was Sir John Crosbie, named for John Chalker Crosbie (1876-1932) founder of the Crosbie dynasty. A business man involved in hotels, insurance, manufacturing, exporting, and shipowning, he was also an influential politician (at one time caretaker Prime Minister of Newfoundland). Like his descendants he was a flamboyant risk taker and made and lost fortunes.
The ship named for him entered service in 1963, and its first trip was to Thule, Greenland. 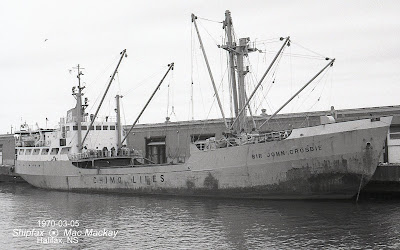 The ship measured 1800 grt, and about 2200 dwt. Its two holds were served by six 5 ton and one 20 ton derricks. Propelled by a 10 cylinder Werkspoor engine of 2300 bhp it was capable of 13 knots. Both ships were also fitted with a limited amount of refrigerated cargo space.

Sir John Crosbie participated in northern supply work from 1962 through to the 1970s, and the 1963 seal hunt.
In 1967 Sir John Crosbie made several trips to Sable Island where it landed 4600 tons of exploration gear for Mobil Oil. A plan to convert the ship to carry containers for the Montreal Newfoundland service was abandoned when more suitable ships were found.

The ships were equipped with a helicopter landing platform above the after deck. This was used by seal hunting spotter craft, but could also be used in northern sealift work.

The second ship was named for the son of the first namesake.
Chesley Arthur Crosbie (1905-1962) built up the business and was also heavily involved in Newfoundland politics and was father of  John Carnell Crosbie (1931 -2020), the recently deceased politician. "Ches" Crosbie as he was known was also a high risk business man. He lead the company into numerous ventures, some successful and some not - but usually spectacularly.

Chesley A. Crosbie was delivered in late 1964 and had a similar history to its sister ship, although it does seem to have participated in the seal hunt more frequently. 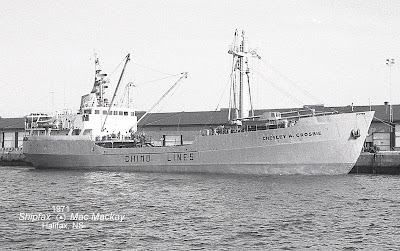 The small tug on deck forward was used to push landing barges at remote northern ports where there were no piers.

Crosbie+Co and Chimo were on the financial skids again in the early 1980s and eventually went bankrupt in 1982. Both ships were sold to another St.John's company, Puddister Trading Co. 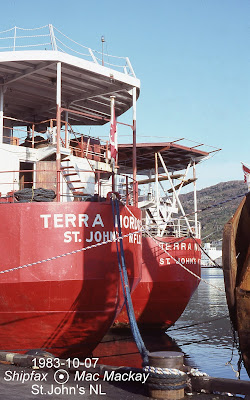 Sir John Crosbie was renamed Terra Nova in 1980. The ship was used for a variety of activities such as fisheries patrol, research and some northern supply work. The first of these was an unlikely use for a cargo ship. 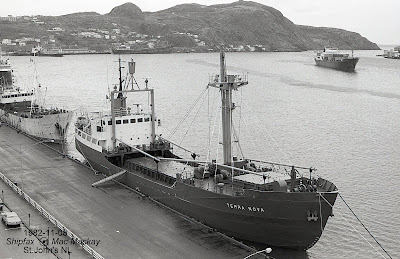 Terra Nova alongside in St.John's as Catalina arrives on its weekly trip from Montreal.
Note the crow's nest and cross beam added to the masts at the bridge. Access is by ladder from the top of the funnel!

It received ice damage in Lancaster Sound October 3, 1990. After temporary repairs in Nanisivik, it was laid up in Botwood and declared a Constructive Total Loss. It was sold foreign and its Canadian registry was closed December 23, 1991. Renamed Holsten under the Honduran flag, it went to the Caribbean.  On October 2, 1992 in heavy weather at 28.18.04N X 84.25.08W (roughly at the intersection of lines due west of Tampa, and due south of Panama City FL) a ballast tank ruptured  and the ship went down in 200 ft of water. Fortunately all 15 crew were rescued. Reports indicate the ship was carrying a cargo of flour out of Tampa. 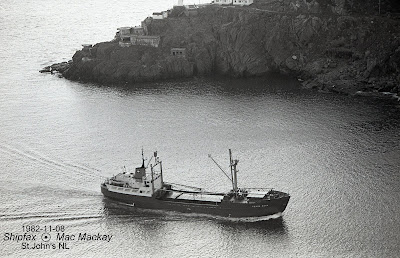 The Chesley A. Crosbie was a frequent participant in the spring seal hunt in the 1960s and 1970s (in 1968 it had a crew of 85). However its chief claim to fame came in 1972 when it reached the farthest north of any Canadian merchant ship to date when it landed supplies in Eureka.

Following the sale to Puddister Chesley A. Crosbie took the name Terra Nordica in 1982. It had a refit at the Dartmouth Marine Slip in June 1982 at around the time of the sale. 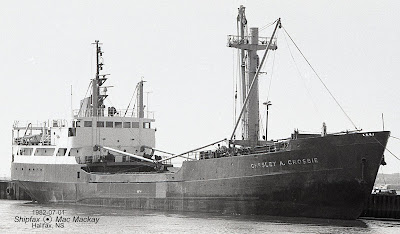 The ship's ice belt is visible in this photo.

While with Puddister it had a similar history picking up odd scraps of work here and there, including the seal hunt for a few years.

It was sold to Honduran flag owners in 1992 and renamed Northern Star. Renamed Tica in 1995, it was again renamed Sandakan in 1997, this time under the Belize flag. 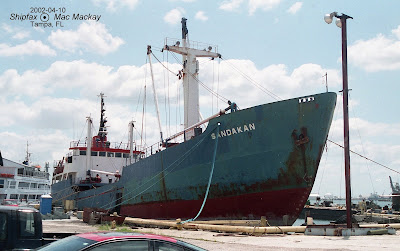 An icebreaking bow looks quite out of place in the port of Tampa, Florida where I stumbled upon the ship and recognized it immediately.

Lloyd's Register deleted the ship in 2011, believing its existence to be in doubt. That could mean it was demolished somewhere, but is more likely beached and abandoned in some out of the way spot. 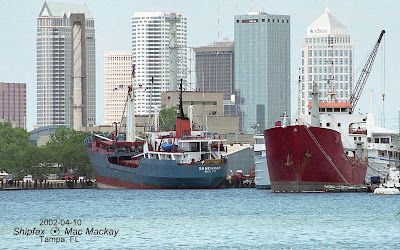 Aside from the Belize City port of registry, the ship remained essentially unchanged from its Crosbie days, including the helicopter platform, when I last saw it.