A small ad in today's paper notified potential bidders that tenders will close March 2 for Phase 5 of the South End Container Terminal Extension.

The work currently underway includes a lot of fill and the cope wall on top of the sunken crib work. The next phase will be Armour Stone, dumped along the water's edge to protect the fill from being washed out by storms.

The work underway now involves scores of dump trucks pounding up and down city streets daily bringing the fill from quarries, then dumping it into the harbour. All that activity is probably what has scared away the usual large winter duck population in the harbour. For the first time in many years there are no eiders wintering over in Halifax. There are small numbers of mergansers and a few mallards, but well short of the usual numbers by my unofficial count.

More worrisome however is the lack of eiders. Our largest duck, its habitat is threatened as are its nesting areas. Let's hope its absence from Halifax is temporary. 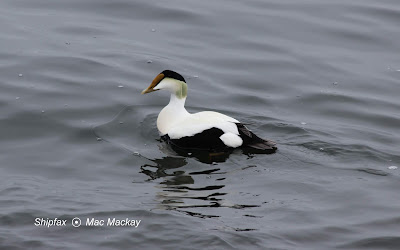 Hunted for its down, the eider population was severely impacted, but was slowly recovering. However its nesting sites are now overwhelmed by hungry gulls and the eiders are still at risk.

The armour stone, if it is anything like the current armour stone along the breakwater will do nothing to beautify the harbour edge. Instead it will be a catch-all for debris.  As it is impossible to maintain, it never gets better looking only worse. 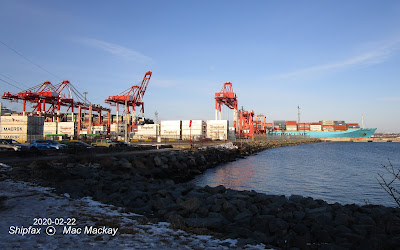 As the major interface between the Port and the public in Halifax, one would hope that a little more care might be put into making it more attractive than just a rock dump. And how will the rock be delivered? Probably by truck (!) when there is a whole harbour available to transport material by ship or barge.