Where the Action Is

Despite layoffs of 450 CN employees at Autoport, there are still ships arriving with cars. Today it was Boheme with the usual consignment of European brands. The cars are unloaded to open storage by longshoremen (not CN employees). 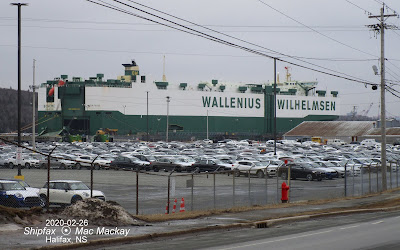 With rail activity still curtailed, it may be some time before some of these cars leave the storage compounds. Some vehicles that are being shipped privately are still moving out of Autoport by truck. However most cars arriving from manufacturers must be prepped and loaded on rail cars by CN employees. There is also some other RoRo traffc - such as the large off road dump truck seen in the background - that will likely be leaving by truck. (The dump truck may not be for here at all, it may just have been moved out on the pier to allow cars on and off the ship.)

Unaffected by rail blockades (except for propane) Irving Oil is still receiving product by ship. Today's arrival is Inyala, a Singapore flag tanker from Unicorn Shipping. Built by SLS Shipbuilding Co in Tongyeong in 2008, the 25,400 gt, 40,037 dwt ship has an unusual two tone paint scheme.

The ship's last port is given as Saint John, NB, indicating that it unloaded a part cargo there before coming here.

Where the action wasn't, was at the container piers, with Oceanex Sanderling alongside at PSA Halifax and Nolhanava fueling at pier 9. I think an ACL ship will be coming in tomorrow with cargo from France for St-Pierre et Miquelon and local industries.