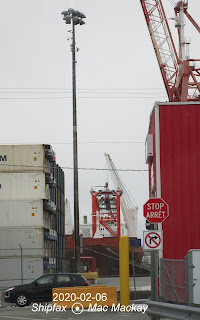 Spuigracht is tucked in at pier 36 and prepares to unload . 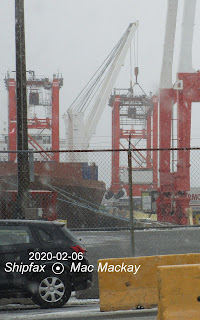 Interestingly PSA has continued Halterm's equipment numbering sequence. Rather than replacing old units with new units of the same number, it is apparently assigning new numbers to new units, but adding to the old sequence. The older units were built by ZPMC in China and the new units by Kone in Europe, and were loaded in Rotterdam..

The newer Kone units, which Halterm started ordering a few years ago, can stack containers five high, whereas the older units could only reach four high. 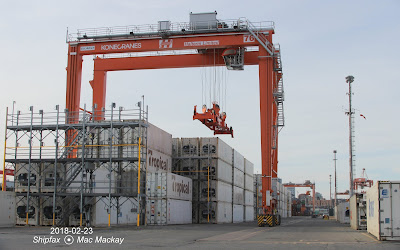 Halterm was set up for four high stacking, including service platforms for reefers, but with new RTGs such as Kone number 76, they can go five high.

Update#1
In the original post I did not mention the presence of what appeared to be private security, in a black unmarked car, staking out the driveway at the head of pier 36. I hope this is not a sign of things to come for PSA.

Update#2
The latest delivery of RTGs have come a long way since the 1969. This 1 TEU version was the first of its type to be seen on the Halifax waterfront. 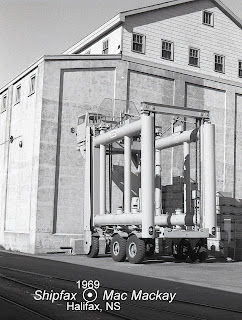 The chain operated straddle carrier was built by Clarke Equipment.

However PSA must be aware that modern terminal operators around the world are now using electrically operated RTGs. Some ports are even using automated/driverless technology to move containers in their terminals. Diesel RTGs are old technology, and will certainly have to be replaced before their "end of life" as ports will be forced to reduce their carbon footprint.