Some Business as Usual

Following ACL's decision to divert ships from Halifax and today's statement by HAPAG-Lloyd that it will likely follow suit, things were not noticeably quieter in the Port of Halifax.

At Autoport the Grande America made a scheduled stop. The CN owned facility served layoff notices yesterday to its own staff. However it may well be able to accept deliveries of cars since these are generally offloaded by members of the Longshoremen' s union. CN's own employees prepare the vehicles and load them for onward delivery. Because CN also has a great deal of storage space and usually keeps cars until they are needed, they may well continue to receive deliveries. 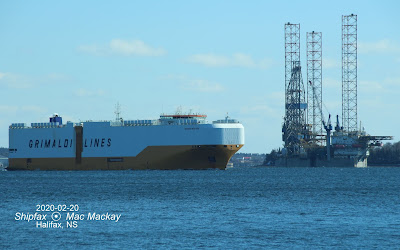 The Grande New York, outbound from Eastern Passage, passes the drill rig Noble Regina Allen which is due to sail tomorrow.

At Cerescorp Fairview Cove MOL Motivator (not pictured), a first time caller for THE Alliance, arrived and sailed on schedule on its westbound leg. Whatever it unloaded here that was to go on by train will be sitting on the ground for a time unless it can be trucked. The ship would normally pick up eastbound cargo in a week or so when it comes back on the return leg. Unless rail service resumes soon, there may not be much of that.

At PSA Halifax the terminal was working today with arrivals and departures and ships alongside. The ZIM feeder Hansa Meersburg made its regular call from New York, but with a very light deck load, and very high in the water. Its arrival is timed with tomorrow's arrival of Zim Monaco but it is apparently not planning to take any of that ship's cargo, as it will have sailed from Halifax before Monaco arrives. 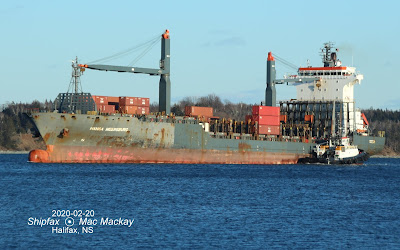 ZIM will certainly be one of the lines weighing its options if there is a prolonged loss of rail service in Halifax.

Not affected by the lack of rail service the small general cargo ship BBC Kwiatkowski got away from pier 9 destined for Cristobal, Panama. It appears the ship has been fitted out to carry undersea cable and is off to pick up a load. 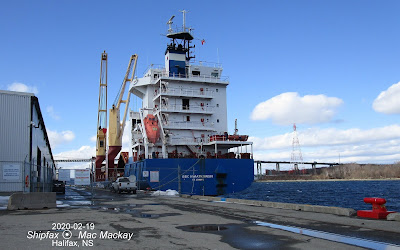 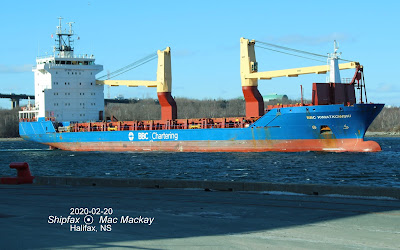 The ship has been known to call here before, sometimes carrying rail for CN. Built in Gdansk as Eugeniusz Kwiatkowski in 2008, the 6155 gt, 7732 dwt ship carries a pair of 120 tonne capacity cranes.

Also unaffected by rail serve, the naval supply vessel Asterix moved over to the Irving Oil Woodside terminal this morning as soon as Acadian had sailed. 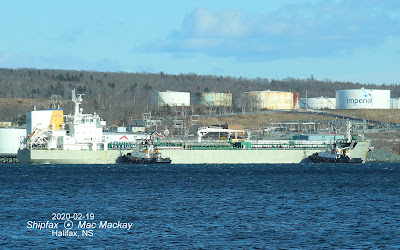 Because the ship has now been alongside all day, it is safe to assume it is taking on more than its own fuel. It is likely also taking on re-supply fuel for other ships for annual spring exercises. 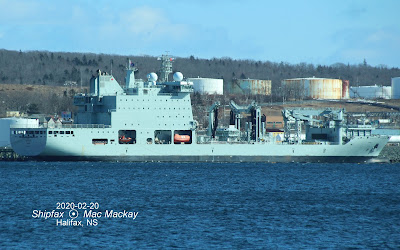