Comings and Goings - and old news.

Despite the halt in train traffic, there is still some activity in the Port of Halifax. Trucks have been able to take up some of the work, but they are stretched to the limit, particularly long haul.

Zim Monaco arrived and sailed, but there is no telling how much cargo the ship off loaded on took on. 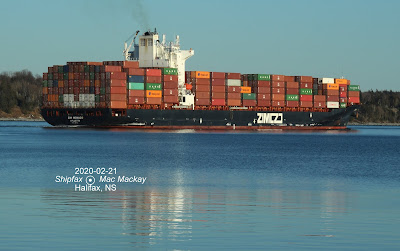 The two coastal container services, Oceanex to Newfoundland and SPMI to St-Pierre et Miquelon and Newfoundland are still providing their services, but some reduction in cargo must be expected. 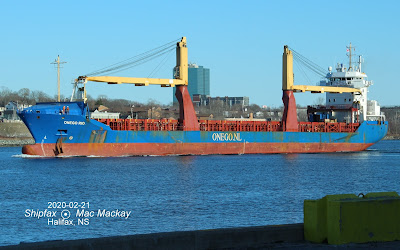 After unloading its cargo of rails Onego Rio moved from pier 27 to anchorage in Bedford Basin. This normally means the ship is awaiting orders for its next assignment. 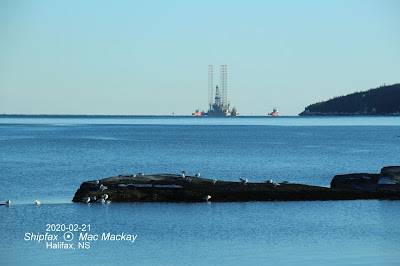 Having completed refit work the jack-up drill rig Noble Regina Allen "sailed" late this morning under tow of Siem  Commander and Atlantic Osprey with Atlantic Tern in attendance. The rig was visible well out to sea in the cold clear air.

News from Wednesday
Thanks to helpful fellow harbour watchers I am able to explain the following photo taken off Africville on Wednesday. 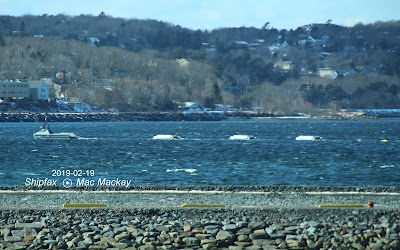 It depicts the RNMB (Royal Navy Motor Boat) Hussar towing three Coil Auxiliary Boats (CABs). Able to operate autonomously Hussar was delivered to the Royal Navy as part of a new method of mine clearance. Rather than sweeping for mines with grapples and chain cutters in the old fashioned way, the CABs replicate the acoustical signature of ships causing the mines to detonate far from the minesweeping mother ship. Autonomous operation, controlled from land or, presumably a distant ship, reduces the risk to human life.

There is talk that the RN will adapt some of its older minesweeping vessels to carry this system. Perhaps some RCN Kingstons could be adapted too.

The RN and manufacturer Atlas win the acronym of the year (so far) award for the ARCIMS = Atlas Remote Combined Influence Minesweeping System - but is still early days!