Tancook Ferry to be replaced

The Province of Nova Scotia announced yesterday that there will be a major change in the Tancook Islands ferry service. Tenders will be issued for construction of a new vessel to be delivered for 2022, and the ferry terminal will be shifted from Chester, NS to Blandford, NS. Crossing time will thus be reduced from 50 minutes to 30 minutes and the number of daily round trips will be increased to eleven. (There are now four to six trips on weekdays, with two on Saturdays, Sundays and holidays, and cars go by reservation only.)

The new $10mn ship will be funded jointly by the Province and the Federal government.

I did a major post on the ferry service several years ago:

The current vessel, William G.Ernst is in refit with Scotian working as replacement. I see the tug Kenneth A making many trips to Chester, but also to Blandford too, but whether this is involved or not I can't tell.

Many questions remain to be answered, such as why is there such a sudden increase in demand for vehicles on the islands, and why make such a radical change in terminus. Surely both changes will have a huge impact on island life. 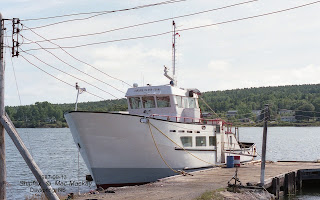 An older photo of the William G. Ernst taken at Snyder's Shipyard in Dayspring, NS.