High winds and rough seas continue to cause delays to harbour traffic. Movements within the harbour are possible, but conditions are too rough at the pilot station to embark or disembark pilots.

CSL Thunder Bay completed loading at National Gypsum, then  rather than staying at an exposed berth overnight, moved to anchorage position number 1 in the lower harbour. 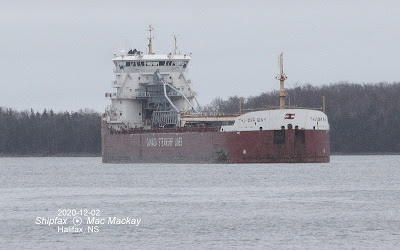 The ship will remain there until pilotage operations resume - perhaps this evening. Number one anchorage is for short term visitors, and it can accommodate large ships. I suppose Thunder Bay chose this anchorage to leave lots of room for other ships in Bedford Basin. 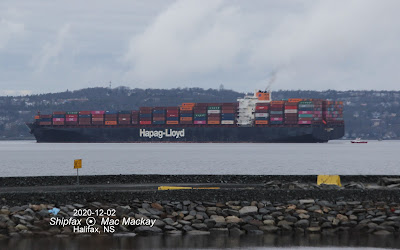 Dalian Express completed its cargo work at Cerescorp, Fairview Cove and moved to anchor in Bedford Basin yesterday, allowing Budapest Bridge to tie up. Dalian Express, 88,493 gt, 100,006 dwt, built in 2001 by Hyundai, Ulsan has a capacity of 7506 TEU (including 700 reefers).
Naval vessels also came in from sea to anchor, including HMCS Fredericton, which has been exercising offshore for several days.

Fredericton's helicopter sits on the flight deck as the ferry Vincent Coleman makes its way from the Halifax terminal to Woodside.
Yesterday's self-piloted departure from Imperial Oil, the Algoscotia [see: post ] left number 3 dock free, and Irving Oil's Acadian moved in there from Irving's Woodside terminal. 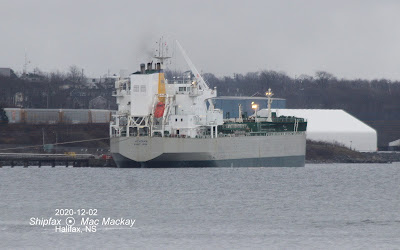 Irving and Imperial Oil used to share terminal and tank space, but it is now rare to see an Irving tanker at an Imperial dock. Irving Oil also used to be the only source for furnace oil in the region, so there may be a similar reason for this visit.
.