The local newspaper reported in this morning's edition that contractors working on CCGS Jean Goodwill and CCGS Hudson exposed crew members to COVID-19 before the crews went home for Christmas breaks. The Coast Guard's response and method of communication with the crews are being questioned by the Chronicle-Herald and others.

As previously reported, the Bedford Institute, where the boats are based, is full up over the Christmas week:

Among the ships at the base is CCGS M.Perley. It would normally be in winter layup, but a crew may be called to re-activate the ship to participate in the wreck location of the scallop dragger Captain William Saulis which was lost in the Bay of Fundy with all hands on December 15. Some debris has been found, and the body of one of the six crew has been recovered. However despite air and sea searches the wreck itself has not been located, nor the remaining crew. 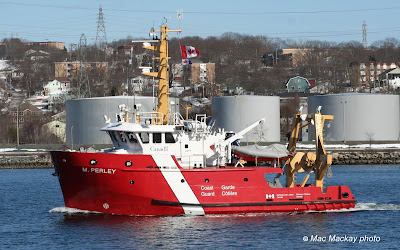 Built in 2012 by Méridien Maritime Réparations in Matane, QC, the 22m long, 211 gt vessel is used for nearshore fisheries research. However for this operation it would assist the CCGC North Light workboat with a Sonar search.

(Moses Perley (1804-1862) was appointed New Brunswick's Fisheries Commissioner in 1855 and was an early cataloguer of fish species in the region.)