Use of the word "integrity" seems to be on the increase. Once it was just an assumed characteristic of most people and things. It now seems necessary to assure others that you, your company or its product has integrity. Overstating it does little to reassure me, but it does make those companies that can bring themselves to use it a sort of cachet, if only in their own minds.

The Port of Halifax has had lots of "integrity" lately with three ships of the name showing up in within a few days. Yesterday it was the autocarrier Integrity operating for American Roll On Roll Off Carriers. (That company likes the name so well it also has a ship called ARC Integrity in its fleet too.)

When IT International Telecom added another cable ship to its fleet, based at Pier 9A in Halifax, they named it IT Integrity. It returned to port December 12 from a repair mission to Cabot Strait. 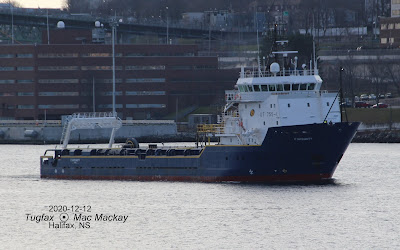 Passing Pier 9A today on its way inbound to National Gypsum, Algoma Integrity caught the sunlight quite nicely. 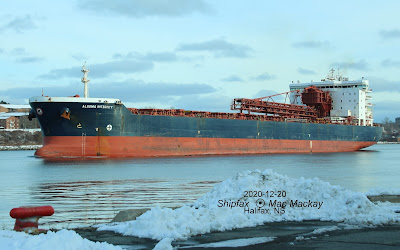 The ship more or less inherited its name from its original owners, Canadian Gypsum who called it Gypsum Integrity. Since they intended it for use in our northerly climate, they equipped it with enclosed bridge wings, giving excellent weather protection year round. The ship is on a more or less regular run these days delivering raw gypsum to Baltimore, and other US ports. It was here twice in November.
Current owners Algoma Central Corp, gave the ship its current name in 2015, and placed it in the CSL Americas pool.
Aspirational and perhaps inspirational names for ships seem common nowadays, but as with many fads and fashions they do get overworked after a time. Perhaps this particular word has hit that mark and thus lost its integrity.
.