Some Boxes Moving, Oil too

The port was back to full operation today with PSA Halifax working two ships. While there is no glitch in PSA's operations, there may be a delay for one of the lines it serves.

The Icelandic shipping line Eimskip's vessel Lagarfoss en route from Reykjavik for Halifax had a main engine breakdown December 27, while some 230 miles off Gardskagi. The Iceland Coast Guard took the ship in tow and it is due in Reykjavik, December 31.

A dramatic night time photo on Eimskip's website shows the ICG making up the tow: 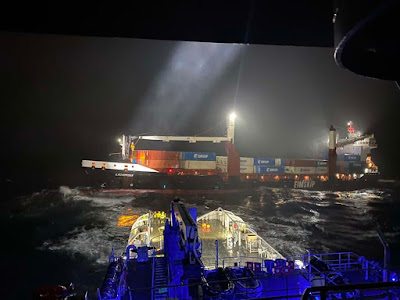 Not only does the Shipping line connect Iceland to eastern North America, it also works a feeder service from Halifax to the Boston area through Portland, Maine, carrying boxes for other lines such as CMA CGM.

Both ZIM and MSC had ships at PSA Halifax today. The ZIM ship was not one of their usual vessels, but was a spot charter,  ALS Apollo at Pier 42. 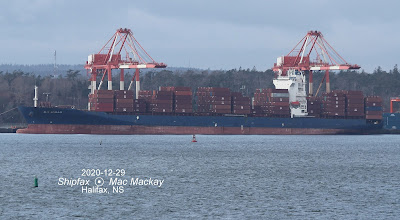 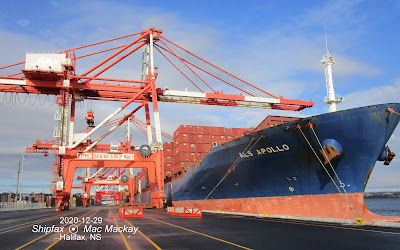 At Pier 41, MSC Rochelle was making another call for MSC. It had called previously during the Montreal labour dispute in August. No official announcement has been made, but it seems MSC has decided to speed up its import (westbound) Europe -St.Lawrence service by calling Halifax first, at least for a trial period. 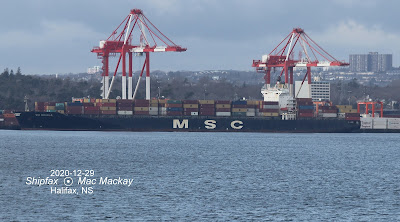 MSC is noted for operating older, but interesting, ships, and this one is no exception. Built in 1997 by Hyundai Ulsan, it is a 53,324 gt,, 62,000 dwt carrier with a 4688 TEU capacity. It started life as Pugwash Senator for a ten year charter. In 2007 it was renamed CSAV Appennini and in 2012 became Pugwash. After a short stint as MSC Curitiba in 2013 it reverted to Pugwash in 2014, but became MSC Rochelle later the same year.
The village of Pugwash on Nova Scotia's Northumberland Shore achieved renown when the industrialist Cyrus Eaton  (a native of the village) established a conference centre and conferences on science and world affairs, eventually winning the Nobel Peace Prize in 1995. 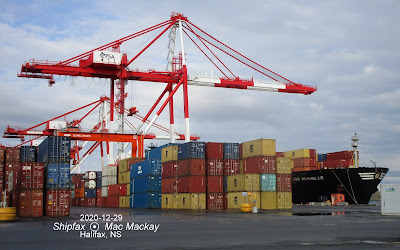 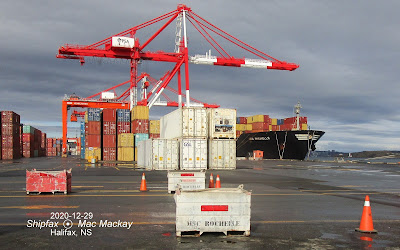 Despite good close up observation from the breakwater, stacks of boxes block a clear view. As unloaded containers pass the "gear boxes" in the foreground, longshore workers remove connector twist locks, and deposit them in the boxes, which are returned to the ship.

Both Imperial Oil and Irving Oil had ships in today. The latter had Acadian, from Saint John, and the former has Atlantic Journey from Garyville, LA. a 29,256 gt, 49,999 dwt ship, built by Hyundai Mipo in 2018. I hope they had a paint warranty - the ship is looking very scruffy for only two years old. 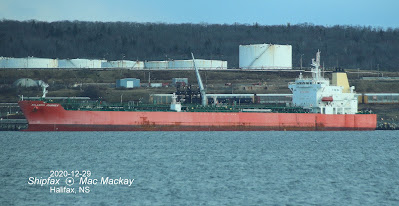 This is the second ship in the last few days from Garyville, site of a Marathon Oil refinery. Imperial had been sourcing product from Antwerp until quite recently. 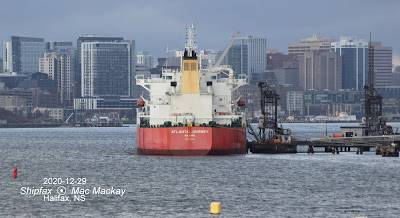 Speaking of scruffy, Imperial Oil has plans to upgrade the number three oil dock next year. The jetty and catwalks are badly deteriorated. They will also be installing mooring buoys that will allow ships to remain alongside in bad weather, but will likely need the services of a line boat to secure the ships' lines to the buoys.
.
Posted by Mac at 7:11 PM