There was another MSC ship at PSA Halifax today. This time it was the eastbound MSC Lorena from Montreal on the Turkey-Canada service. 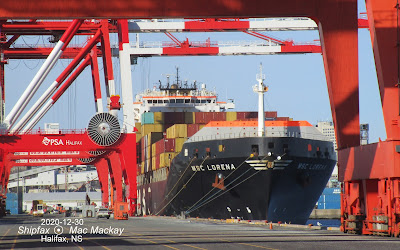 I noted yesterday that MSC is well known for using older ships, often with interesting histories. MSC Lorena however has spent its entire career with MSC. From the time it was built in 2006 by Daewoo, Okpo, it has carried the same name. The 50,963 gt, 59,587 dwt ship with a capacity of 4860 TEU, including 500 reefers, was originally owned by Compton Overseas Equities Corp. In 2016 ownership was transferred to Pegasus Carriers. These are likely investment vehicles, giving no hint as to actual ownership.

MSC, which may surpass Maersk as the world's largest container line sometime in 2021, is apparently re-jigging its Canada services again, this time combining their Turkey-Canada Express with their Canada Express 2, running Montreal, Halifax, Valencia, Sines, Halifax, Montreal. The objective is to make the Atlantic crossings at maximum draft and cargo capacity. They will top up eastbound or lighter off westbound in Halifax to reduce draft to meet seasonal requirements for the St.Lawrence River's Quebec to Montreal section. This will allow them to use their ships as efficiently as possible. (It is impractical to build wide, shallow draft vessels exclusively for St.Lawrence service, although it has been done by some other lines, such as HAPAG-Lloyd.)

The ships that MSC operates were designed for world wide trade, and to restrict them to under 12m  draft means that they are carrying far less than their ideal capacity.  This photo of yesterday's visitor MSC Rochelle shows the lightly loaded ship on the St.Lawrence River. 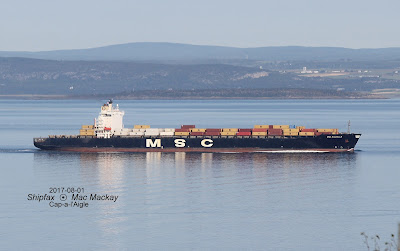 So far we have seen MSC Poh Lin and MSC Rochelle stop in Halifax westbound and eastbound, and it looks like we will see ships on a weekly basis into the new year.