In some of my more curmudgeonly posts, I have decried current naming themes for ships, due to lack of originality [oh yes - see previous post] but today's subject is a member of a fleet with an originak scheme for naming. Many of M-Maritime's ships have a domain name followed by the extension for Greece. Thus Niovi. Gr. (Niovi or Niobe is a figure from Greek mythology.)

The ship is tied up at Pier 28 loading grain, and is thus almost impossible to photograph (maybe when it sails I can do better). 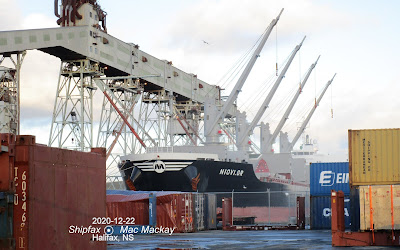 The ship itself is quite new, delivered in October 2019 by Namura  Shipbuilding Co Ltd, Hakodate Dock. Following current practice for Handysize bulkers, it is double hulled, with five holds. Holds 2, 3 and 4 are box shaped and served by four 30 tonne cranes, with grabs.

M-Maritime, based in Greece, manages about fifteen ships of several different classes, and assigned to operating pools. Niovi.Gr appears to be in the Hamburg based TMA Bulk Pool.

This is not the first time that a domain name has appeared on a ship however. In 1998 Canada Steamship Lines was among the first - if not the very first - to show the company's web address on the ship's side.

The ship was Atlantic Erie *(built in 1985 as Hon. Paul Martin, renamed in 1988) a self-unloader of Seaway size. It was repainted as part of a drydocking at Verreault Maritime in Méchins, QC, and when it emerged in October 1998 the ship had " www.csl.ca" on its sides instead of Canada Steamship Lines or the simpler CSL of its fleet mates.

Web sites are de rigeur for companies now, but CSL was certainly ahead of its time in 1998 posting theirs on the ship's flanks. 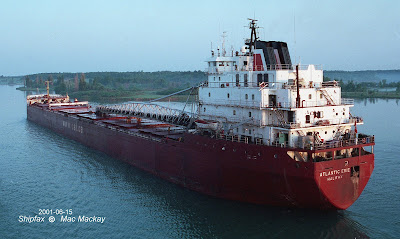 Seen here in the pool between the Snell and Eisenhower locks of the US portion of the St.Lawrence Seaway, the Atlantic Erie displays CSL's web address.

* Atlantic Erie incurred severe bottom damage when it grounded January 11, 2015 in the Magdalen Islands. It was patched up sufficiently to be towed to layup in Montreal. In 2016 it was towed to Aliaga, Turkey for scrap.