Business - not as usual

Very high winds have had widespread effects on navigation and marine activities in the Atlantic region today. From cancellation of ferry service between Nova Scotia and Prince Edward Island, and delay to the start of the lobster season in southwest Nova Scotia, many mariners are sitting comfortably on shore or in port.

Of course there are many others having a rough time of it at sea. Those include crews on ships scheduled to arrive in Halifax since this morning, who are now looking at tomorrow at the earliest before pilots are able to board. Departures from port are similarly effected, but with an exception. 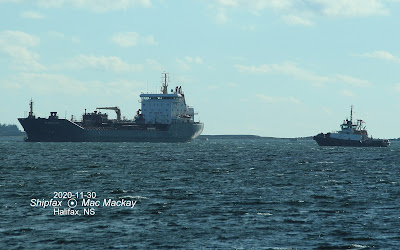 Algoscotia arrived in Halifax November 30 in breezy conditions. The tug Atlantic Willow assisted it to dock at Imperial Oil.

The tanker Algoscotia arrived yesterday, November 30 from Sarnia, ON and docked at Imperial Oil.  It sailed again this afternoon "self-piloted". That generally means that the ship's master or a senior officer has a pilotage waiver. Having satisfied harbour pilots of acquaintance with the harbour over number of previous voyages, a waiver can be issued.

It has been known for a master to take a ship to sea without pilot and without waiver, but that is extremely rare, but might occur in an emergency.

Imperial Oil has been importing most of its refined product from Antwerp and some more is coming soon from Louisiana, but it is rare to bring cargo from Sarnia. Imperial operates its former refinery here as a storage and distribution centre for the area, so has a variety of fuels in storage, including gasolines, diesel and aviation fuels.

Algoscotia was built in 2004 by Qiuxin shipyard in Shanghai and measures 13,352 gt, 16,810 dwt. Algoma Tankers purchased the Imperial Oil tanker fleet and carries their product extensively.