It was a day for some non-typical activity in the harbour. The ZIM feeder ship Taipei Trader (see yesterday's post) moved from Pier 36 to anchorage in Bedford Basin. 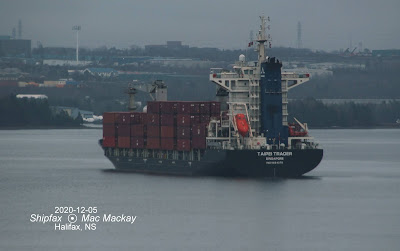 The ship appears to be fully loaded, so must be either getting a repair or waiting out a schedule. ZIM seems to have a lot of empty boxes in Halifax, so maybe it is hauling some of those away.

The newly delivered CCGS Jean Goodwill moved from the Bedford Institute to Pier 9C where a crane lifted off a large cylinder and placed it on a truck. The cylinder looked like a stern roller, but was secured on deck when the ship arrived. (See previous post) 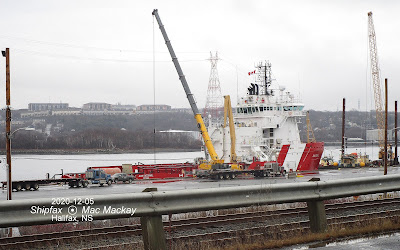 There was another unusual arrival at Pier 9C, the factory stern trawler Mersey Venture. 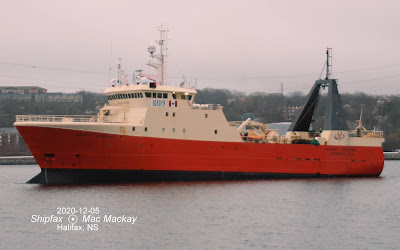 The attractive vessel was built in 1988 in Norway (started by Tangen Verft, and completed by Langsten Slip, Tomrefjord). It is a 2337 gt freezer trawler, usually engaged in the shrimp fishery for Mersey Seafoods Ltd of Liverpool, NS. The shrimp fishing grounds are in the far north, off Greenland, and trips can take up to two months. However its recent track shows it coming from the Gulf of Maine, headed for its home port of Country Harbour, NS. Its visit to Halifax must represent a change of plan of some sort.