The oil terminals were busy today with arrivals and departures. The familiar Elka Nikolas arrived at Irving Oil, Woodside. This tanker has been in Halifax several times, mostly recently in September  when it brought product from Antwerp for Imperial Oil. 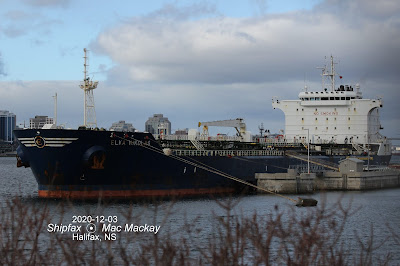 This time the ship has cargo from Amsterdam. Irving Oil's Woodisde terminal is a little more visible now that the leaves are off the shrubs.

Last evening the tanker Largo Desert anchored in the lower harbour awaiting its berth at Imperial Oil, which was occupied by Irving Oil's Acadian. When that ship sailed this morning Largo Desert moved in. * 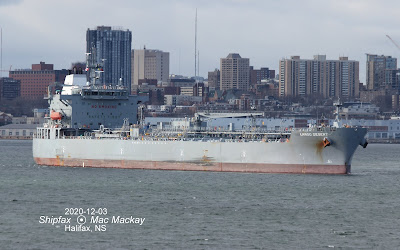 Distinctive for its all gray colour scheme, the ship is also unusual because it was built in Ninh Hoa, Vietnam, by Hyundai's Vinashin Shipyard. It is nevertheless a pretty typical MR tanker of 29,463 gt, 49,703 deadweight. Delivered in 2018 as  ECO Palm Desert it was renamed in March of this year when it was acquired by the anonymous Jupiter 2 Ltd. It also changed technical management at the same time and is now operated by Anglo-Eastern Ship Management Singapore.

Anglo-Eastern manages more than 600 ships, including 200 tankers, and 100 container ships. Commercial management is handled by another rather opaque corporate based in London, UK.

Meanwhile at Pier 27, Onego Deusto [see previous post] has just about completed discharging its cargo of rails. It is showing a particularly clean looking hull, suggesting a recent drydocking and painting. 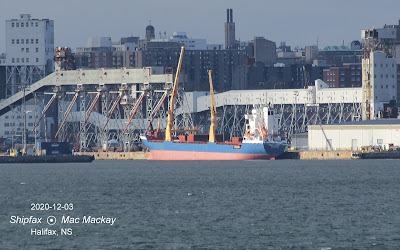 The ship is due to sail at midnight, so no closer picture is likely!

* Forgot to mention that the Largo Desert arrived from the Marathon refinery in Garyville, Louisiana.