The self-unloading bulk carrier CSL Tacoma sailed today with less than a full load of gypsum. Built in 2013 by Chengxi, Jiangyin, it is a 43,691 gt, 71,552 dwt ship that can load to a draft of 13.5 m (summer) [about 69,000 tonnes deadweight at winter draft of 13.2m]. However it does not load to full draft in Halifax due to the depth of water at the National Gypsum pier. The ship's AIS signal states that its draft at sailing was 9.2 m which would give a deadweight of 42,000 tonnes. I could not read the draft marks, but it appeared to be much less than that - say about 8 meters giving about 34,000 dwt. 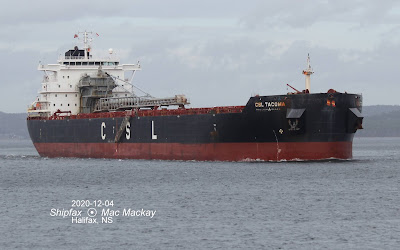 I know of no draft restrictions at its destination port of Savannah, GA, so it is likely just the Halifax restriction that causes it to sail with a lighter than maximum load. 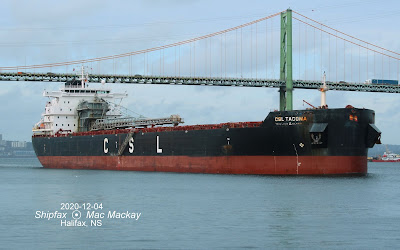 The ship is a regular caller in the CSL Americas pool.