Even though April 27 is the Dutch national holiday, one would be forgiven for thinking that today (December 8) was some sort of special event for the Netherlands.

A procession proceeded up harbour this morning with the lead vessel, a Dutch built tug of course,  towing a Dutch built barge, itself carrying three small Dutch built tugs, and accompanied astern by another Dutch-built multi-purpose craft.

All this was in aid of the delivery of two of the small tugs to the local Halifax company Dominion Diving. It was their utility craft, Dominion Warrior bringing up the stern. 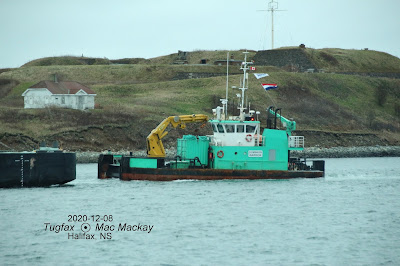 Dominion Warrior flying the flag of the Netherlands as a courtesy, bringing up the rear.

The two small tugs, Dominion Enforcer and Dominion Rumbler were offloaded using one of the container cranes at Ceresorp's Fairview Cove container terminal. 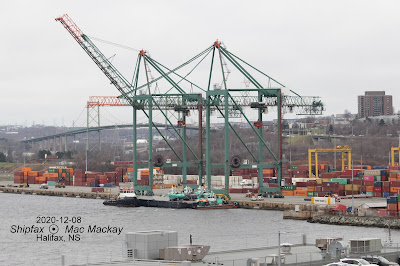 After unloading the two small tugs, the lead tug, Amy Lynn D and the barge Jacob Joseph C will  proceed onward to Picton, ON where they will be taken over by their owners the Doornkamp family, owners of a large aggregates and port operation at the eastern end of Lake Ontario, called Picton Terminals.

The third small tug, Saint-Georges  was built to the account of Quebec owners and will be delivered en route.

The Dutch company Damen, responsible for building the four tugs and the barge (called a pontoon in European parlance) have a world-wide business building and operating tugs, barges and a variety of other types of ships. They even provide the delivery crews for the ships that they sell. This particular transaction concluded with the larger tug Amy Lynn D towing the pontoon and its precious cargo, across the Atlantic from Algeciras (Gibraltar) to Halifax in frightful weather, with no apparent damage.

For more detail on the tugs, see recent posts on Tugfax including:  December 6