Halifax has taken delivery of its new fireboat. 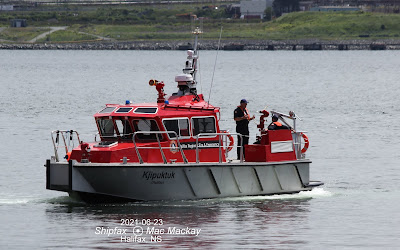 One of the on again off again discussions at the City Council of Halifax since the early days of the 20th century has been the topic of fireboats. The responsibility for fighting fires on ships in the harbour or on shoreline structures such as piers and buildings has been debated periodically, and various entities have taken on duties in one way or another from time to time.

If that sounds rather wishy washy and vague, it's because there has never been a definition of responsibility, but there has been a lot of cooperation and some controversy over the years.

The Royal Canadian Navy has its own fire department in HMC Dockyard, with trucks and land based apparatus. They respond to alarms in all military properties in the area. CFB Shearwater on the Dartmouth side of the harbour also has specialized firefighting apparatus for its airbase.

There is also a Canadian military fire training school in suburban Halifax that specializes in training for shipboard fires.

The HMC Dockyard has three large and three small tugs fitted for fire fighting ,with new more capable tugs under construction in Quebec. (A dedicated fireboat was decommissioned in 2014.) Crews have specialist fire fighting training for shipboard fires, aimed more at military type vessels than civilian.

The military has always been willing and able to assist in "civilian" fires, and with shipboard fire expertise available, has perhaps "taken the heat" off civilian authorities.

Atlantic Towing Ltd, the operators of harbour tugs in Halifax, has up to four tugs in service at all times, with firefighting capability. They are classed as FiFi1, the most basic  level of capability, but have very powerful water pumping capability, and foam generation. Their crews, while very capable are not trained firefighters.

When there was an offshore oil and gas industry off Nova Scotia, many of the supply vessels had fire fighting capability too, and some special training for rig and offshore installation fires. However with the demise of that industry, those vessels are now gone from the harbour and surrounding waters.  A fire out at sea could not expect any significant fire fighting assistance from Halifax.(There is ample search and rescue capability however.)

The Halifax Regional Fire and Emergency Service  (HRMFES) was formed in 1996 when the fire departments of Halifax, Dartmouth, Bedford and Halifax County were joined into one administrative unit. However the force traces its roots in Halifax to 1754 and is the oldest fire service in Canada.

The Halifax Port Authority, a federal crown corporation, which has responsibility for all the waters within the Port has no firefighting force, but relies on the HRMFES for fire fighting on its lands.

Similarly the Canadian Coast Guard, provides Search and Rescue services in the area, but its ships are only equipped for limited external fire fighting. They have no emergency towing capability (unlike Canada's west coast), nor salvage capability. They operate seasonal Search and Rescue in the harbour, and a year round seagoing lifeboat based outside the harbour in Sambro.

Following the disastrous Halifax Explosion of 1917, there was still debate over who was responsible for fire protection and firefighting in the harbour. During World War II the City of Halifax chartered its own fireboat, the famous Rouille from 1941 to August 1945.

The National Harbours Board (predecessor by several generations of the Halifax Port Authority) also chartered its own fire tug in 1943, the legendary ex Chicago fire boat James Battle.

Both were well used in ship and pier fires during the war and were on hand to fight the Bedford Magazine fire in 1945, that could have resulted in an explosion to rival that of 1917.  See: Bedford Magazine Fire

Near the  end of World War II, the RCN could justify construction of some dedicated fire tugs, after emergency temporary conversions had been used in naval facilities during hostilities. After 1945 at least one fireboat was then on duty in Halifax. In 1978 a new boat, the Firebird, was delivered, and it was operational 24/7 until budget cutbacks in 2014.

There were some notable fires on the old creosoted timber piers in Halifax in the 1950s, but since the mid 1960s there has not been a significant fire along the shore. There have also been very few shipboard fires. Both waterfront oil refineries (which had some in house firefighting) have been closed and dismantled but there are still six shoreside petroleum and fuel storage facilities.

In an early precursor to the current rash of fires on container ships, the container ship Kitano en route from New York to Halifax March 22, 2001, reported fire in a deck container as the ship was approaching Halifax. Due to unknown risks, it was not allowed to enter port, there were no resources capable of assisting the ship offshore due to severe weather, so it was left to the ship's crew to fight the fire. The salvage tug Ryan Leet, hired by the owners, had modest fire fighting capability, was able to do very little while the ship was at sea.

Eventually a harbour pilot boarded the ship, and it was declared safe enough to enter port where trained military firefighters got the situation under control. Even so, after the ship was moved to Fairview Cove to unload, with the fire seemingly extinguished, the HRMFES discovered deep seated fire in one container.

Activated charcoal pellets were implicated in the fire as they have been in so many subsequent container ship fires.

Since 2001 there has been no significant improvement in response capability. Aside from the civilian tugs built since then, there has been the loss of the dedicated navy fireboat and seagoing salvage tugs.

The world's shipping industry has been largely wringing its hands over more and more severe container ship fires. (If you haven't yet heard of the X-press Pearl, its potentially criminally liable captain, agent and owner - make a quick Google news search). Little has been done to make shipping practices and ship design safe, let alone find a way to fight fires on container ships.

We had our own near brush with a container ship fire when Yantian Express caught fire en route to Halifax in January 2019. It would likely have been a carbon copy of the 2001 incident had the ship been a little closer to port, and not in dead of winter. Instead it was diverted to Freeport, Bahamas..

As mentioned in the 2019 article the Halifax Fire and Emergency Service identified the need for a dedicated boat. How they did so and what risks they identified are unknown, but they were certainly not based on Halifax waterfront firefighting history since the 1960s. The number of creosoted piers and unprotected buildings have diminished dramatically since then, nor have there been small boat or ship fires of any significant number. The main risk as I have identified it is container fires aboard ship, involving hazardous materials with environmental implications. However the new boat will provide year round search and rescue capabilities in the harbour, which have been lacking.

Now the HRMFES has acquired its own fireboat carrying the service designation /call sign "Fireboat 1".  However it has been named Kjipuktuk (Halifax) a very strange (and to my mind unnecessary) amalgamation of words. The Halifax Regional Municipality occupies unceded territory of the Mi'kmaw, and their word for a large body of water is K'jipuktuk. The word was corrupted by English speakers as "Chebucto" (a similar corruption "Chebacco" is in use in New England) and has been widely used to identify this harbour. It is certainly time that the original word was recovered, and as it is not difficult to pronounce should enter common use. Why "Halifax" has to be added - even parenthetically - is a mystery, although it does specify which large body of water is cited. The name Halifax was borrowed from George Montagu-Dunk, 2nd Earl of Halifax (England) and President of the Board of Trade at the time Halifax was founded in 1749. He was not responsible for the atrocities committed by the founding military lieutenant governor of Nova Scotia, but appending the name Halifax seems an unnecessary reminder of colonialism and potentially tone deaf at a time when reconciliation with original populations is at the forefront.

Built at Metalcraft Marine of Kingston, the boat appears to be a standard Firestorm 36 model, with a pumping capability of 3,000 gpm. Fitted with two monitors and two discharge ports, it is waterjet propelled and capable of 39 knots. It has towing bits and push knees, and is fitted for rescue work, and will be confined to the harbour. It apparently will not have a full time crew, but will be staffed from Station#13 King Street, Dartmouth, and Station#5, Woodside, so fast response should not be expected. The boat may enter service in late August after crew training. How suited it is for large shipboard fires is unknown, but external hull cooling is often required, so high pumping capacity is useful. 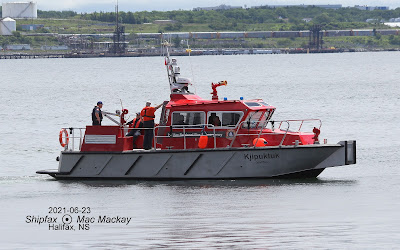 Unfortunately this is not the HRMFES's first try at operating a fireboat. A misguided first attempt ended in disaster and near tragedy. Another Transportation Safety Board report makes scary reading. See M08M0062

Despite is name and mission, I wish the new boat well and hope it finds a useful occupation in Halifax harbour and does not just become another budget drain. 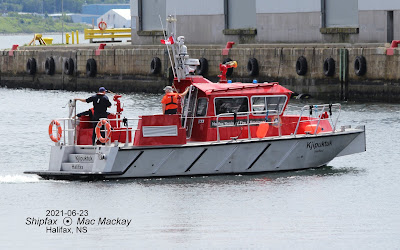