As previously reported THE Alliance (HAPAG-Lloyd, Yang Ming, ONE, Hyundai) has been adding larger ships to its EC5 service. Some of those ships will be too large to reach Cerescorp's Fairview Cove terminal and will have to be serviced at PSA Halifax. Today's arrival of Conti Annapurna represents just about the largest ship that can clear the two harbour bridges, which is the controlling factor. 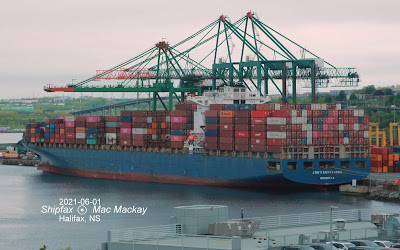 Built in 2004 by Hyundai Heavy Industries in Ulsan as Pacific Link it is a 90,745 gt, 101,906 dwt ship with a capacity of 8238 TEU, including 700 reefers. The German ship management company NSB Niederelbe renamed the ship in 2016, and it is currently operating for HAPAG-Lloyd. The ship is owned by a number "KG" investment syndicate in Germany.

Conti Annapurna is eastbound for Suez, having skipped its westbound call from Suez in mid-May.