NYK Line has a total of twelve sister ships of the same class, all named for constellations except this one, NYK Constellation which summarizes all the names. Most of the ships are Halifax callers  on The Alliance's AL5 service including NYK Delphinus which has been in Oakland, California since May 17 after a fire on board May 14 after sailing from Vancouver. 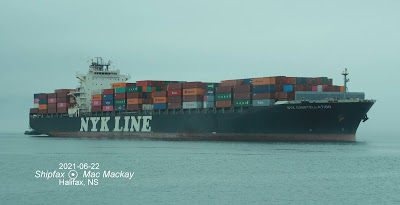 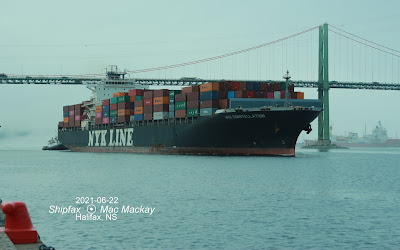 June is notoriously Fog Month in Halifax and this year there have been several "invisible" arrivals and departures. Fortunately in my quest to collect photos of the whole set of Constellation sister ships, the fog held off around the shoreline of Bedford Basin for the June 22 departure. And there was the incidental benefit of reduced background clutter.