The multi-purpose general cargo ship Thorco Liva is back in Halifax.  By my count this is the ship's fourth visit since 2016, and for the same reason. On first arriving early this morning the ship anchored for Asian Gypsy Moth inspection. When cleared after a few hours it proceeded to its berth. 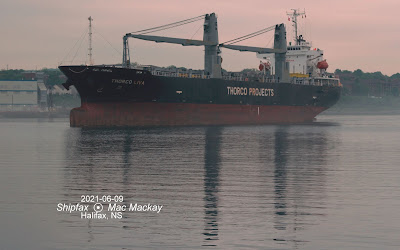 The Thorco Liva makes a near ghostly advance in the Narrows to Pier 9C as a little morning fog lingers.

Built in 2012 by the family-owned Honda Shipyard in Saiki, Japan, Thorco Liva is a 13,110 gt, 16,901 dwt ship. It is fitted with portable pontoon tween decks and a pair of 50 tonne capacity cranes. Danish owner Thorco Projects operates more than seventy ships for heavy lifts, oversize and irregular shaped cargoes. The fleet includes seven of these "L" class ships, and sisters Thorco Luna , Thorco Logic and Thorco Logos have also called here for the same purpose.

At Pier 9C the ship will be installing prefabricated steel racks to carry fibreoptic cable. It will likely then proceed to Newington, NH to load the cable as it has done on the three previous visits. Each of those visits was noted in this blog: