Today, Friday June 25, was the first of two big days for the Royal Canadian Navy. HMCS Sackville, Canada's World War II Naval Memorial, returned to its summer station at Sackville Landing on the Halifax waterfront (coincidentally at the foot of Sackville Street). The ship is fresh from a major refit at HMC Dockyard where a new skin of plating was added to the hull. The ship's original plating had deteriorated and was dangerously thin. The new plate will ensure that the ship remains afloat and safe for many years to come. 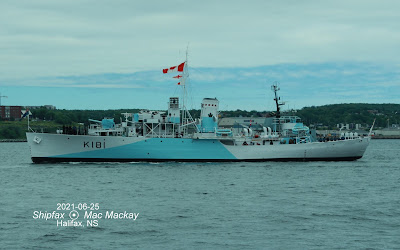 With the tugs Glenevis (partly visible) and Merrickville (not visible), Sackville completes a sail past.

Powered by tugs, Sackville did a grand tour of the harbour from the Dockyard to the Narrows, back to the lower harbour,  circumnavigating George's Island.

The submarine HMCS Windsor , with the Admiral aboard, made a trip to Bedford Basin and returned to the lower harbor  to take the salute. 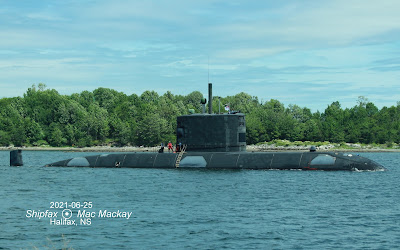 Displaying the Admiral's pennant, and missing several acoustical panels from the hull, Windsor is southbound in the Narrows.

Also in the harbour for the ceremony, were numerous naval small craft, and the RCN's oldest vessel Oriole, under sail (but also using its engine due to light winds.) 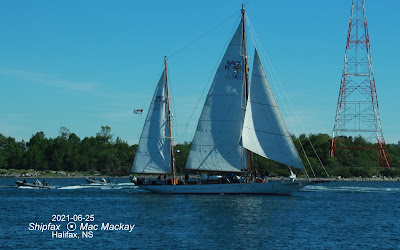 As Sackville approached its berth, the Stadacona band stuck up "Heart of Oak", accompanied by McNally Construction on the tenor chain saw, hard at work on the adjacent new piers. 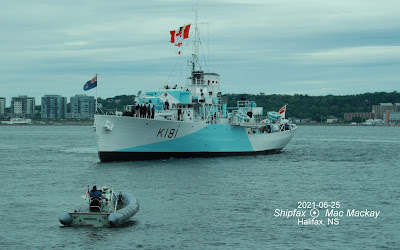 Later in the day HMCS Fredericton was noted taking fuel from Asterix and HMCS Toronto headed to Bedford Basin anchorage. 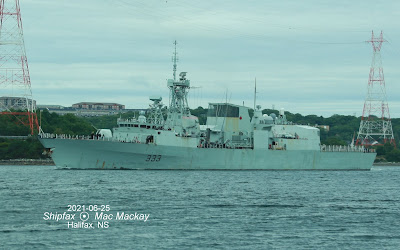 Big Day 2 will be tomorrow, Saturday, June 26 when the RCN's newest ship, HMCS Harry DeWolf  AOPV 430 is commissioned. The first of the Arctic Offshore Patrol vessels built by Irving Shipbuilding in Halifax, was handed over to the RCN eleven months ago and has been busy with post-acceptance trials at sea.