Two more bulkers called in Halifax today, June 26, but neither one came for cargo. (The only bulk cargo usually handled in Halifax is gypsum -see footnote.)

The first arrival was the Panama flag, but Chinese owned Hong Sheng. 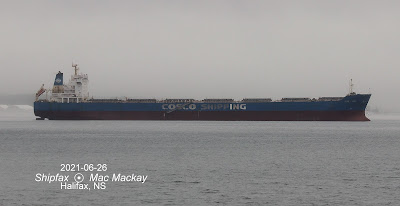 A 40,896 gt, 76,546 dwt gearless vessel, it is bound for Port Cartier, QC to load iron ore, but anchored in Halifax for Asian Gypsy Moth inspection. Despite vigilance by the Canadian Food Inspection Agency, central Canada is experiencing a major infestation, which is expected to weaken huge swaths of urban and rural trees of all types. 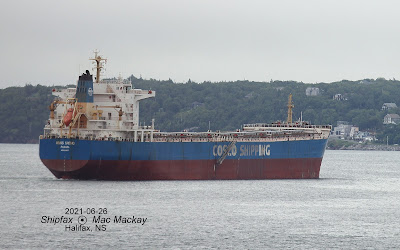 The Chinese COSCO Bulk Shipping Co Ltd operates Hong Sheng, which dates from 2010 when it was built by the Guangzhou Huanpu shipyard. [COSCO=China Ocean Shipping COmpany].

The second bulker is an unusual customer. It is flying the flag of the United States and is registered in Annapolis, Maryland, home port of the Schuyler Line Navigation Co LLC. 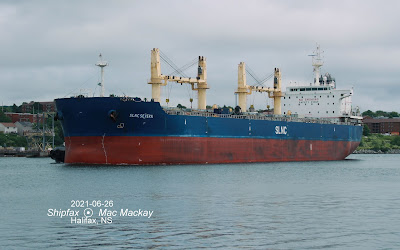 SLNC Severn was built in 2017 by Samjin Shipbuilding Industries, in Weihai, China as Frederike Oldendorff. It was renamed early this year when it was bareboat chartered by SLNC. A 33,737 gt, 57,888 dwt ship it is fitted with four 35 tonne capacity cranes and 12 cubic meter grabs. 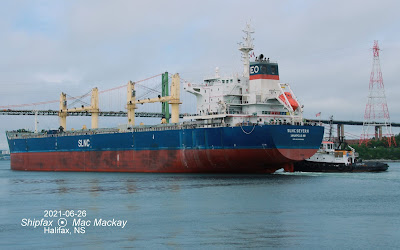 SLNC has both Jones Act and non-Jones Act US flag ships including tankers, general cargo/heavy lift and cargo barges. After inspection and maintenance the ship will be heading for Auld's Cove to load aggregates. The ship is still carrying the Egon Oldendorff initials on its funnel.

Although Gold Bond's mine in Milford is closed short term for maintenance, it still has a gigantic stockpile at its facility in Wright's Cove, Bedford Basin. Yesterday it loaded the Canadian flag self-unloader Thunder Bay, which sailed for the Great Lakes.

Thunder Bay at the Gold Bond dock with its boom swung out to clear the mobile ship loader.