Ocean Network Express (ONE) continues to rebrand ships in the group. As they come up for scheduled drydockings, they are repainted in the unique ONE magenta and renamed. Today's arrival is the ONE Hangzhou Bay the former Hangzhou Bay Bridge. It is operated by K-Line, one of the three partners in ONE (MOL and NYK Line are the others.) 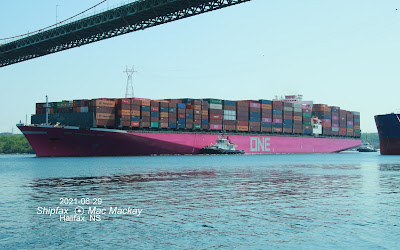 The ship was renamed effective January 1, 2021. It has now been assigned to THE Alliance's EC5 service. Its last port was Colombo, Sri Lanka (June 9) and arrived Halifax via the Suez Canal (June 16-17). Its next scheduled port calls are New York (Bayonne), Savannah, Jacksonville, Norfolk and back to Halifax for July 12.

With the tugs Atlantic Fir (alongside) and  Atlantic Oak (astern) the ship prepares to turn in Bedford Basin. The tug Atlantic Cedar also assisted in its passage through the Narrows. [see Tugfax later today.]
.
Posted by Mac at 5:58 PM