The Royal Canadian Navy's first Arctic Offshore Patrol Vessel (AOPV) can now carry the designation HMCS Harry DeWolf (AOP 430) after it was officially commissioned Saturday June 26. Technically it was AOPV1 during the last 11 months since handover by Irving Shipbuilding and during post acceptance trials. 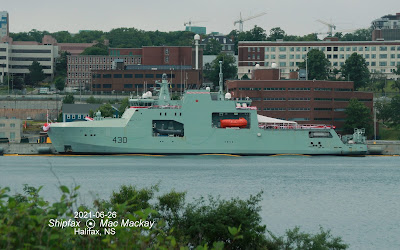 With bunting on the rails and a tent on the helo deck, AOPV1 was making ready for commissioning yesterday morning. The containment boom deployed about the ship was perhaps an overly cautious case of belts and suspenders.

As I have observed before, construction cranes on the Halifax skyline are due in large part to the economic impact of high paying shipbuilding jobs. The region is thriving and experiencing a population boom, which is expected to continue (despite COVD-19) for some time to come.

Halifax shipyard has three more AOPVs under construction for the RCN with another two to follow plus two more for the Canadian Coast Guard for a total of eight ships. AOPV2, to be named for Margaret Brooke, is under builders trials and AOPV3 to be named for Max Bernays will be floated this fall. AOPV4 the future William Hall is assembling under cover. 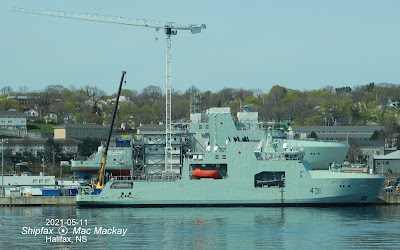 Pre-construction activity on the RCN "Surface Combatant" program is also ramping up to the design stage. The Canadianized version of the BAE Type 26 frigate, to be built by Irving Shipbuilding, is expected to see steel cutting in 2024. Up to 15 ships, in a "build them slow" program will extend out over a twenty year period.