Most foreign flag tankers that call in Halifax are in the 50,000 tonne deadweight size and fall into the Mid Range MR2 category. They bring in refined petroleum products such as gasoline, diesel fuel and jet fuel. Therefore the arrival today, June 21, of Beatrice was unusual in a number of ways.

In the first place the ship has no cargo for Halifax, but it may have instead have arrived for Canadian Food Inspection Agency clearance from Asian Gypsy Moth larva. That survey apparently went well, as the ship was in and out in a few hours. It is rare that tankers require CFIA inspection since they are usually coming from the US or Europe, well out of the native range for the invasive species. 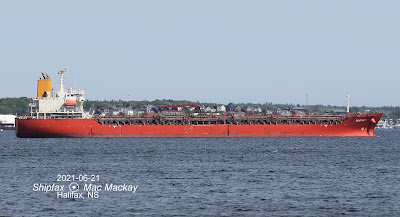 This tanker is instead coming from Damietta, Egypt, a port known for its huge LNG complex and a methanol (methyl alcohol) production plant owned by the Canadian company Methanex. Methanol is an important component of many chemicals including solvents, industrial anti-freeze and fuels. (It is  flammable and highly toxic.) Methanex operates a tanker fleet, called Waterfront Shipping Ltd, numbering some 20 or more chartered ships, but is little publicized and not well known.

Beatrice is a specialized chemical tanker, built in 2013 by Asakawa Shipbuilding in Imabari, Japan. Although showing a similar profile to larger tankers it measures only 14,750 gt, 25,932 dwt - about half the capacity of most MR2 ships.

The ship's destination is Montreal, Quebec, which is within the deciduous forest region of Canada, most at risk of infestation by the Asian Gypsy Moth. Oddly the ship was in Becancour, QC as recently as May 9 to 11, so apparently Egypt is a potential source of the moth.