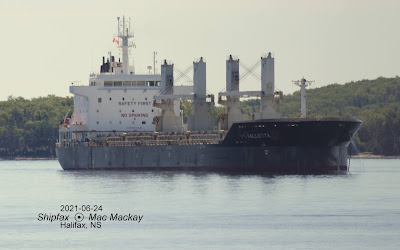 The Maltese flagged PS Valletta occupied number one anchorage in the lower harbour for a few hours to allow inspectors from the Canadian Food Inspection Agency to examine the ship for moth larva. Once it was determined that the ship was free of the invasive species it was permitted to sail. Halifax is the designated inspection port since it is well away from valuable coniferous tree forests that could be devastated by a moth infestation.

The ship is owned by Finav Ltd, based in Valletta, Malta, and is managed by the Italian company Premuda SpA, in turn part of the US private equity platform Pillarstone. It is a typical four crane bulker in many ways except that it was built in 2010 by the Pha Rung shipyard in Haiphong, Vietnam. Originally named San Felice it was renamed in 2020 with its new name reflecting Pillarstone ownership and Finav's headquarters city. 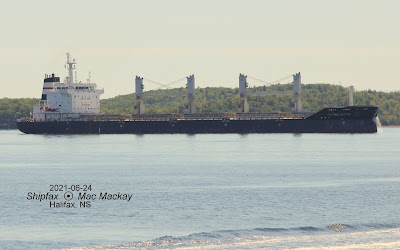 The ship is fully loaded with unknown material. Its previous ports of call are Abu Dhabi May 3-20, Elat May 30, Suez Canal June 4, Damietta anchorage June 5-6.

Sorel is in the heart of the Quebec manufacturing zone an imports steel, iron ores and various other raw products such as salt.