Repeats and a bonus

The harbour was busy today June 12, with several ships at the container and breakbulk piers. All are repeat visitors, although one is under a different name. 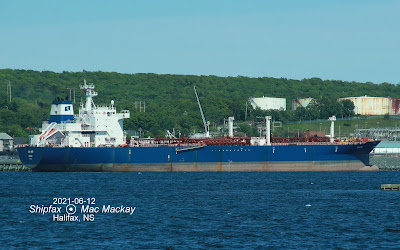 At Fairview Cove it was the MOL Empire . Its last call (which was its first in Halifax) was November 20, 2019 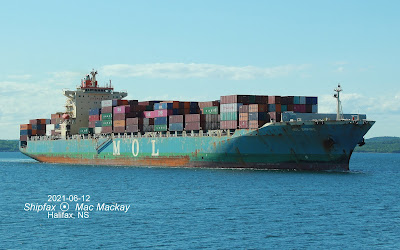 The ship is on THE Alliance's AL5 service , and will be skipping all the usual US east coast ports and sailing direct for Port Everglades, FL, then for the Dominican Republic and so on to the Panama Canal and the Pacific coast. If it does not get snagged in west coast congestion, it may be back in Halifax August 3 on its return leg to Europe.

Also a familiar sight in Halifax is an ACL ship, ploughing its usual furrow back and forth transatlantic. However it is always good to see one pass west of George's Island for a change, to give a slightly different angle of view.Atlantic Sun doesn't appear too heavily loaded. 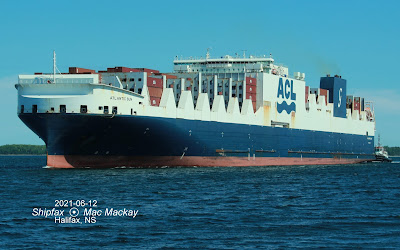 At National Gypsum it was the familiar Algoma Integrity ex Gypsum Integrity, which loaded for Baltimore. 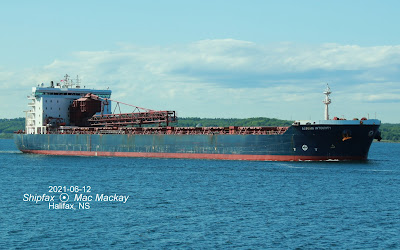 The one arrival which may not sound familiar is the bulker Helena G which arrived from Jebel Ali, UAE, with a cargo of reinforcing steel (rebar). It tied up at Pier 9C, where it began to unload using its own cranes and shore based forklifts. 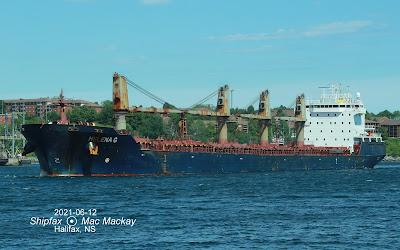 The ship first called here December 25, 2103 and again November 2014, both times under its original name Garganey . The ship was named by its operators CANFORNAV (Canada Forest Navigation) for a species of duck, and on those trips loaded grain.

CANFORNAV ships are regular users of the St.Lawrence Seaway and primarily import steel products and export grain. Garganey was built in 2007 for charter to CANFORNAV and on completion of a ten year term was sold to Olof Brodin Shipowning AB of Sweden. Renamed Helena G it has continued trading to the Great Lakes.

The bonus ship today was HMCS Windsor which has been conducting surfaced operations in Bedford Basin for the past several days. 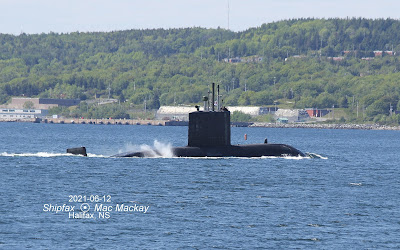