Weekends are frequently busy times in Halifax Harbour. At one time that was due to excessive weekend overtime rates for longshoremen in New York. Ships would clear out of New York on Friday and come to Halifax, or would time their arrivals and departures in Halifax so as to arrive in New York for Monday morning.

That may or may not be the case anymore, but things were certainly busy in Halifax this weekend. Among the visitors was the auto carrier Morning Peace. 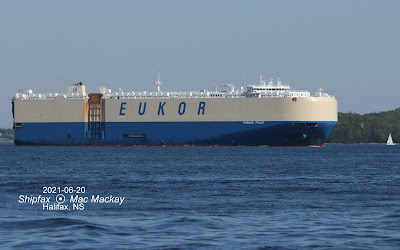 Built by Hyundai Samho in 2017 it is 66,802 gt, 22,438 dwt pure car and truck carrier, with a capacity of 7,368 car equivalent units. Operator EUKOR is combined operation of Wallenius, Wilhelmsen, American RoRo and European Car Carriers, established to transport Korean built cars.
At Fairview Cove the YM Evolution called for THE Alliance's AL1 service. It has been a regular since May 2018. 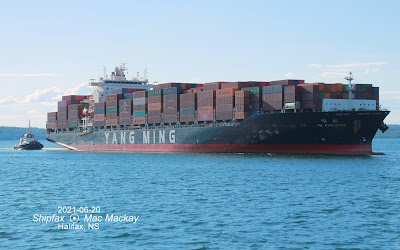 The 47,952 gt, 57,320 dwt ship, with a capacity of 4662 TEU was built in 2014 by China Shipbuilding Corp in Kaohsiung, Taiwan. Due to its relatively small size it was an easy fit under the bridges, but still employed the tug Atlantic Fir as tethered stern escort to line up its course through the Narrows
. 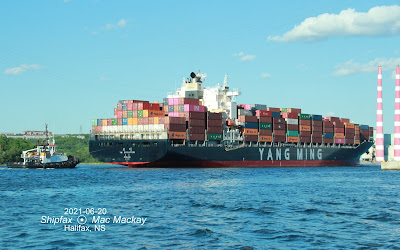