New to Halifax and repeaters

Arrivals and departures today June 29, included first time and occasional callers. The "new to Halifax" ship was the oddly named Dee4 Dogwood. It is a tanker from Antwerp for Imperial Oil, but anchored first for Asian gypsy moth inspection. 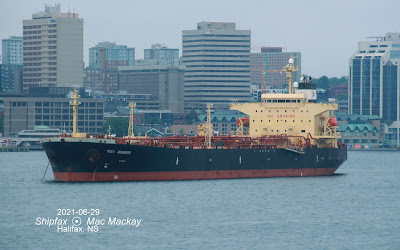 Built in 2008 by Onomichi Zosen in Onomichi, Japan, it is a 26,900 gt, 47,399 dwt MidRange tanker. Originally named Nord Organiser it adopted its current name the same year. Ownership is hidden behind several veils but since 2020 has been listed as Dee4 Vessel Co 4 A/S. The ship is enrolled in the the Danish International Register.
The second arrival has called here before, but the last time was in 2018. The autocarrier Tomar is a 61,328 gt, 22,144 dwt ship with a capacity of 6354 CEU. and built in 2008 by Mitsubishi Shipbuilding in Nagasaki, Japan. 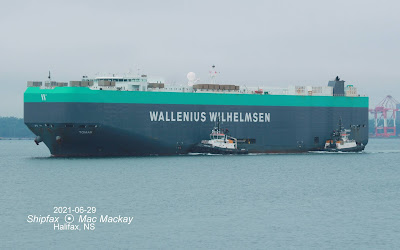 When it was here in 2018 it was painted in the traditional Wilhelmsen orange hull paint. 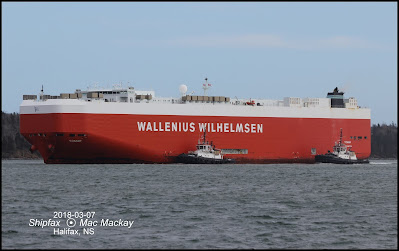 Now that Wallenius and Wilhelmsen have joined forces more formally, they are gradually repainting all their ships in the new scheme. 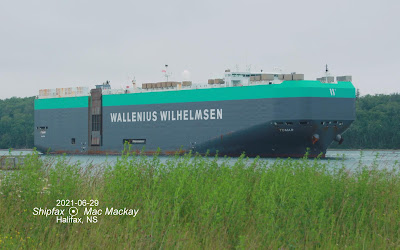 Note: I generally try to avoid too much foreground "noise" in my pictures, but in this case I was unwilling to wade through waist high grass, and risk exposure to deer ticks.
Another re-caller arrived this afternoon. CMA CGM A. Lincoln at one time held the record for largest container ship to call in Halifax. Built in 2017 by Hyundai, Ulsan, the 141,950 gt (revised figure), 148,992 dwt ship has a capacity of 14,414 TEU. 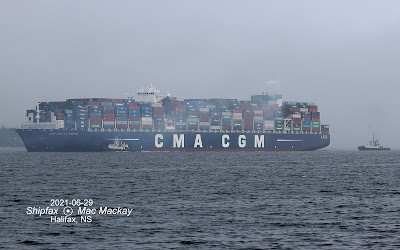 As the ship emerged from the offshore fog, its exhaust gas scrubber was making its own fog bank.
CMA CGM Marco Polo is the current record size holder for container ships in Halifax at 16,022 TEU. That is still well shy of the largest container ships in the world which are closing in on the 24,000 TEU mark.
.